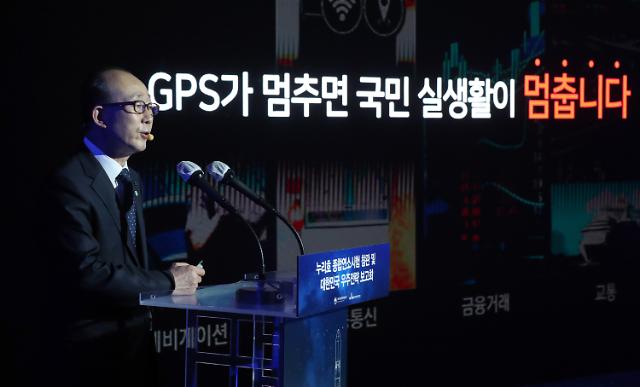 
SEOUL -- LIG Nex1, a defense contractor involved in the development of radar and missile guidance systems, called for a strong government initiative to push forward the launch of an independent satellite-based navigation system, saying it is essential for national security and the growth of self-driving and other advanced technologies.

The global positioning system (GPS) owned by the U.S. government provides geolocation and time information to a GPS receiver anywhere on or near the Earth. Although obstacles such as mountains and buildings block weak GPS signals, GPS provides critical positioning capabilities to military, civil, and commercial users around the world.

South Korea aims to secure the so-called Korean positioning system (KPS) by 2035, based on seven satellites that can provide independent positioning and navigation signals over an area spanning a 1,000-kilometer radius from Seoul. The goal is to prove an ultra-precision location data service and reduce the error range of positioning in its service area to less than one meter.

"South Korea's independent navigation system, KPS is no longer a choice but a national imperative," LIG Nex1 CEO Kim Ji-chan said in a policy conference chaired by President Moon Jae-in at a space center in the southern coastal town Goheung on March 25. "Without its own satellite navigation system, South Korea is completely dependent on U.S. GPS."

GPS is freely accessible to anyone with a GPS receiver, but the U.S. government can degrade the service at any time or selectively deny access as seen in 1999 during the Kargil conflict between India and Pakistan. Russia and several other countries have developed or are in the process of setting up alternative systems.

"If GPS information is suspended in an emergency situation, there will be a panic in which mobile phones, navigation, and financial transactions that we are using will stop at once," Kim warned. For this reason, he said that China, Japan and India have established or are developing their own satellite navigation systems.

If more accurate services are available through KPS, Kim and policymakers think that will serve as a stepping stone for the evolution of new technologies such as autonomous driving, drones, and personal air vehicles. "In order for KPS to function successfully, a number of satellites are required, and satellite control centers and monitoring stations must be established on the ground," Kim said.