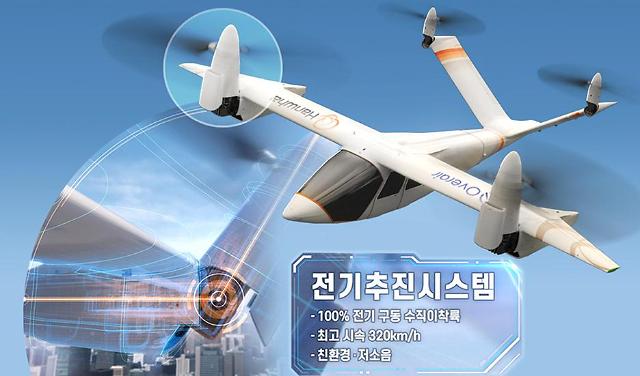 
SEOUL -- The development of an electric propulsion system, which is a core component for the commercial operation of personal air vehicles, is in the final stage, Hanwha Systems said, adding a test would be done in the first half of 2021 with its American partner, Overair. They aim to test an air taxi capable of flying at a maxim speed of 320 kilometers (199 miles) per hour in 2025.

Urban Air Mobility (UAM), an ecosystem covering personal air vehicles and infrastructure. Flying cars are emerging as a future system of travel to avoid traffic jams on urban roads. Hanwha Systems is a key member of UAM Team Korea, a public-private consultative body that would commercialize drone taxis in 2025.

Hanwha's air taxi called "Butterfly" will be applied with the tiltrotor design of low noise and high efficiency. Tiltrotor design combines the vertical lift capability of a helicopter with the speed and range of a conventional fixed-wing aircraft. "If this development is finally successful, we will be able to move forward one step faster than 10 competing companies in the UAM market," Hanwha's UAM business head Kim Seok-kyun said in a statement on March 29.

In 2019, Hanwha Systems made a $25 million equity investment in K4 Aeronautics, a U.S. PAV developer, followed by the acquisition of a 30 percent stake in Overair, which is involved in the development of electric and hybrid-electric vertical takeoff and landing aircraft, or eVTOLs.

Separately, Hanwha Systems unveiled a decision on March 29 to increase capital by issuing new shares worth 1.2 trillion won ($1.06 billion) in June. Some 700 billion won will be used for acquiring other corporations, 390 billion won for operating funds, and 110 billion won for facility investment.

Hanwha Systems would develop small satellites weighing under 100 kilograms in cooperation with Satrec Initiative. For three years from 2021, the company would spend some 500 billion won to launch a pilot service for low Earth orbit satellite communication by 2025.