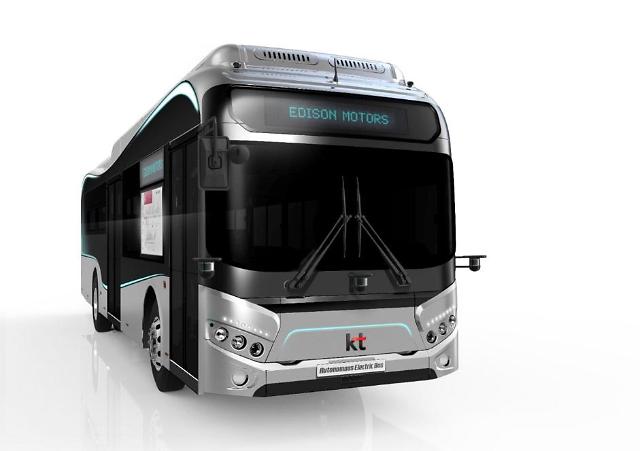 SEOUL -- South Korea's major telecom company KT will test two 5G-connected cooperative self-driving electric buses in a smart city complex to develop a service model, with technologies the company has accumulated for years in building an autonomous driving infrastructure. If the first service model is successful, KT will apply it to other sites.

While self-driving technology allows a vehicle to navigate autonomously to its destination, cooperative autonomous vehicles use vehicle-to-everything (V2X) technology to interact with each other and on-road structures such as traffic lights and pedestrian monitoring devices. An environment installed with cooperative autonomous driving infrastructure is capable of reducing the number of accidents and traffic jams.

KT said in a statement on March 30 that the company would test two cooperative autonomous electric buses at a testbed in Pangyo south of Seoul, known as the South Korean counterpart of Silicon Valley. It will be the first smart electric bus to be tested in South Korea. KT's goal is to launch a commercial service even in a limited environment.

"They will be tested up until the second half of 2021," KT's PR manager Son Bu-sik told Aju news. "The service model for self-driving buses targets residents and businessmen in Pangyo's industrial complex," he said, adding the test buses using V2X technology can communicate and interact with each other as well as other structures such as CCTVs and traffic lights.

The test buses have been built from scratch in cooperation with Edison Motors, a domestic electric vehicle maker, and Phantom AI, a Silicon Valley autonomous driving technology startup. KT would apply the real-time kinematic (RTK) positioning satellite navigation technology, which enhances the precision of position data, as well as a local dynamic map (LDM) and a geographic information system (GIS).

KT has accumulated experience by testing autonomous buses. The company showcased a 5G-connected combustion engine bus equipped with a self-driving system in the eastern ski resort of Pyeongchang, which hosted the 2018 Winter Olympics. The Olympic village in Pyeongchang played the role of a small smart city to test various technologies including 5G data communication, autonomous driving and internet of things (IoT).

The test in Pangyo is part of a project to set up a smart industrial complex. KT would build a technology experience center and establish an integrated management platform for companies. South Korea, installed with 4G and 5G networks, has become a testing ground for autonomous vehicles.