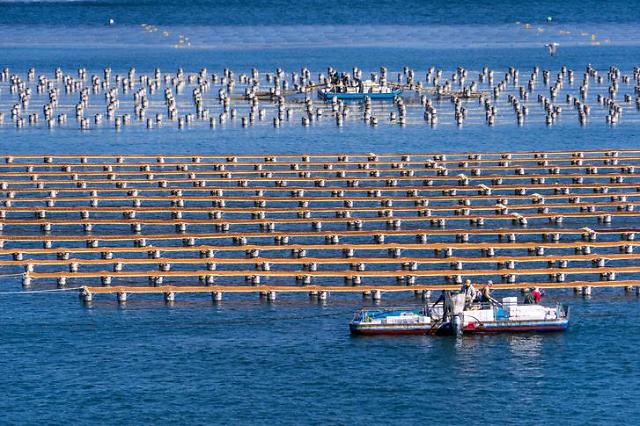 SEOUL -- In an effort to reduce pollution by foamed polystyrene pollution, South Korea will take steps to regulate the use of high-density styrofoam buoys used widely for aquaculture and promote the use of eco-friendly plastic products that releases less microplastic waste into the ocean.

Currently, aquafarmers are allowed to use high-density styrofoam buoys. However, such buoys are easily disintegrated in a short period. When styrofoam blocks are broken down in the sea, microplastics that are less than five millimeters in length are released. Microplastics accumulate in the bodies and tissues of marine organisms as well as soil ecosystems.

The Ministry of Oceans and Fisheries said in a statement on April 5 that it would distribute 5.7 million non-styrofoam buoys to aquafarms in 2021 to replace conventional floating devices. The ministry would ban the use of styrofoam buoys at oyster and seaweed farms in 2022. Other types of aquafarms will be regulated in 2023. The ministry plans to replace some 55 million buoys by 2024.

"We will ban the use of Styrofoam buoys and reduce the rate of microplastic emissions," Hwang Hye-jin, a ministry official in the aquafarm division, told Aju News. She said it is very hard to use biodegradable plastics at aquafarms because the renewable material is not as strong as other plastic materials including polyethylene terephthalate (PET).

In February 2021, a state project was launched to give fishermen a new type of biodegradable fishnets along with subsidies to prevent marine pollution and ghost fishing, a marine phenomenon in which fish get caught by nylon nets that were abandoned or lost. South Korea and Kuwait agreed in late February to share the know-how of producing biodegradable fishnets.