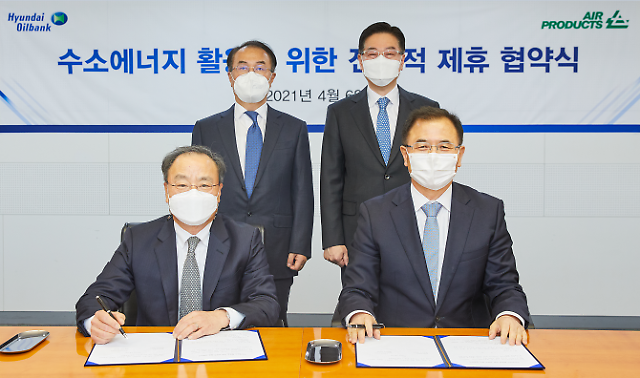 Through cooperation with Air Products, which provides essential industrial gases, related equipment and applications expertise, Hyundai Oilbank said it would produce hydrogen with crude oil by-products and natural gas as fuel for cars and power generation. The company would resource collected carbon into calcium carbonate, dry ice and fertilizer.

Hyundai Oilbank CEO Kang Dal-ho said in a statement on April 6 that his company would try to reduce the proportion of oil refining sales from 85 percent to 40 percent by 2030. "We will transform our company into an eco-friendly energy business platform by increasing the proportion of operating profit generated by three future businesses, including blue hydrogen, to 70 percent."

By 2030, the Hyundai shipbuilding group aims to establish a hydrogen value chain that combines the infrastructure and technology competitiveness of affiliates to produce, transport, store and utilize hydrogen on land and sea. Hyundai Oilbank would produce blue hydrogen and use it for desulfurization facilities or sell it as fuel for vehicles and power generation.

Under a deal on March 3 with Saudi Aramco, Hyundai Oilbank will import Aramco's liquefied petroleum gas to produce blue hydrogen and use Aramco's ammonia as fuel for liquefied natural gas boilers to be established by 2024. Ammonia, which is a combination of nitrogen and hydrogen, was highlighted as the top resource to establish a fuel cell-based infrastructure.