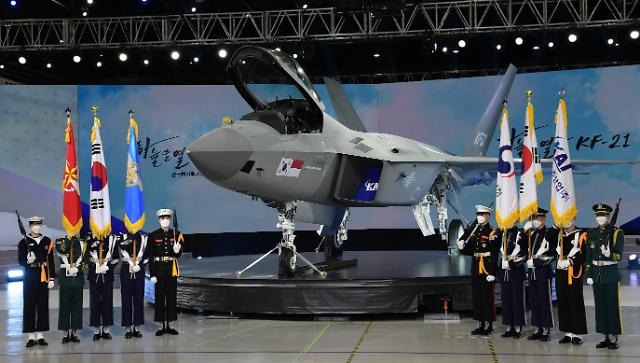 SEOUL -- After nearly two decades of strenuous work to shake off doubtful or sometimes depreciatory eyes from top-class foreign aircraft makers, South Korea finally rolled out the first prototype of its home-made fighter jet which was hailed by President Moon Jae-in as a "historic milestone" in independent aircraft development.

The jet fighter was christened "KF-21 Boramae (Young Hawk)" in a ceremony chaired by Moon at the base of Korea Aerospace Industries (KAI), the sole aircraft maker in South Korea, in the southern city of Sacheon. "A new era of self-defense has opened," Moon said, adding the advantages of homemade fighter jets are "indescribable."

The KF-X project is aimed at manufacturing 120 fighter jets that would replace South Korea's aging fleet of US-made F-4 and F-5 fighters. Specifications outlined by KAI showed that the fighter's maximum speed is Mach 1.81 with its range put at 2,900 kilometers (1,798 miles). With a maximum payload of 7.7 tons, 10 "pods" for missiles and fuel barrels are installed on the bottom of the fuselage and wings.

Research began 20 years ago. However, South Korea had to officially launch the project led by a consortium of KAI and US aerospace giant Lockheed Martin in January 2016 due to technical reasons. Washington has been reluctant to transfer sensitive technologies for stealth fighters and an advanced radar system, prompting South Korea to acquire related technologies independently or through cooperation with other foreign companies.

"The success of developing high-tech Korean fighter jets not only strengthens our national defense but also has a tremendous economic impact," Moon said. "It is installed with state-of-the-art (radar) equipment developed by our own technology," he said, referring to the Active Electronically Scanned Array (AESA) system.

ASEA is a computer-controlled array antenna system that can electronically steer the beam of radio waves to point in different directions, allowing aircraft to radiate powerful radar signals while still remaining stealthy. South Korea has developed ASEA technology with the help of an Israeli firm.

South Korea has yet to overcome challenges such as the development of a long-range missile and Indonesia's lackluster attitude. Initially, Indonesia agreed to invest some 1.7 trillion won ($1.5 billion), or 20 percent of total expenses, in return for gaining access to some technical data and information and producing 50 planes on its home soil. Indonesia has paid only 227.2 billion won out of 831.6 billion won due in February.

The ceremony in Sacheon was attended by an Indonesian delegation led by Defense Minister Prabowo Subianto. "We will be together until the development is completed and the two countries jointly enter the third country market with a mass production system," Moon said, urging Indonesia to honor its commitment.

Along with the development of seekers for missiles to track ground and air targets, South Korea should acquire independent technologies related to a long-range air-to-ground missile system. Germany's IRIS-T and MBDA's Meteor have been selected for air-to-air short- and mid-range missiles. As for the long-range air-to-ground weapon, South Korea has pushed for the development of its air-launched cruise missile (ALCM) by 2028.