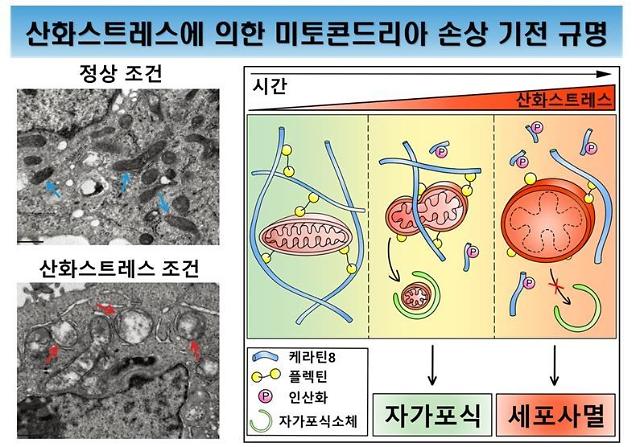 SEOUL -- A university research team has found that mitochondria, simply explained as "the powerhouse of the cell," react with keratin 8, a keratin protein, to dispose of mitochondria damages by oxidative stress. It can be utilized to develop medicines for degenerative diseases such as Alzheimer's disease and cystic fibrosis.

Keratin 8 (KRT8) is a protein that forms the cytoskeleton, a structural network of filaments and tubules, that extends through the cytoplasm, which is basically all of the material within a cell except for the nucleus. The cytoskeleton helps cells maintain shapes and functions such as division and movement.

Mitochondria are membrane-bound cell organelles that generate most of the chemical energy needed to power biochemical reactions. Defective mitochondria affected by damage or stress degrade through mitophagy, the selective degradation of mitochondria by autophagy.

Konkuk Institute of Technology (KIT) said in a statement on April 13 that its research team led by Professor Kim Dong-eun has found that by triggering mitophagy, the selective degradation of mitochondria by autophagy, KRT8 protects retinal pigment epithelial cells against necrotic cell death due to oxidative stress.

The accumulation of dead mitochondria causes degenerative diseases including Alzheimer's disease and macular degeneration, an eye disease. It is vital to stimulate mitophagy to prevent the build-up of dead cells and create new mitochondria.

"Our goal is to develop new medicine for degenerative diseases using the newly-researched chemical reaction point," the team said. The research was published on the website of Autophagy, an international online journal.