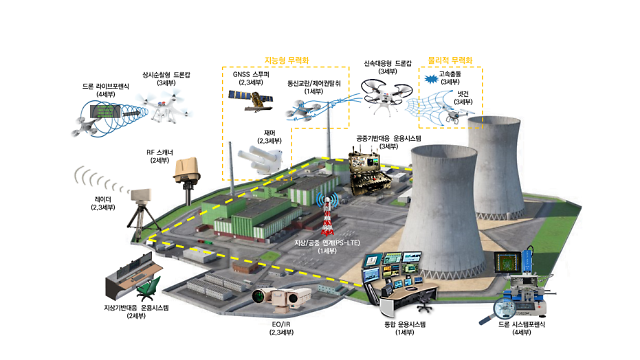 
SEOUL -- A consortium led by South Korea's state-run nuclear research body has been selected for a government project to develop an intelligent drone cop system that could find and neutralize illegal foreign and domestic drones threatening the safety of nuclear power plants, airports and other crucial facilities.

The Korea Atomic Energy Research Institute (KAERI) will lead a consortium involving 23 research bodies and private companies for a five-year project that would cost some 42 billion won ($37 million) to develop core technologies needed for the establishment of a drone cop system, the Ministry of Science and ICT said in a statement on April 18.

The project is aimed at developing an integrated solution that can respond from detection and identification to neutralization, as the high performance, intelligence and clustering of drones raised concerns about illegal activities targeting public facilities, the ministry said.

"It is important to come up with an integrated solution to prepare for illegal activities using drones," Kim Bong-soo, a ministry policymaker, was quoted as saying. "The KAERI consortium will play a role as a reliable helper to secure source technology for the safety of important domestic facilities and also for the global market."

A ground-based system finds optimal measures to identify and neutralize illegal drones in restricted flight zones by using systems such as communication jamming and GPS spoofer, the ministry said. Drone cops would use net capture and high-speed collision, followed by an investigation through forensics-based evidence analysis. The ministry would upgrade technology to establish a system capable of coping with drones equipped with weapons.

South Korea released a roadmap in 2019 to popularize drone-related services and designated regulation-free zones for the development and testing of drones. The operator of Incheon International Airport, the main gateway in the western port city of Incheon, has partnered with military and police authorities to capture or shoot down illegal drones.