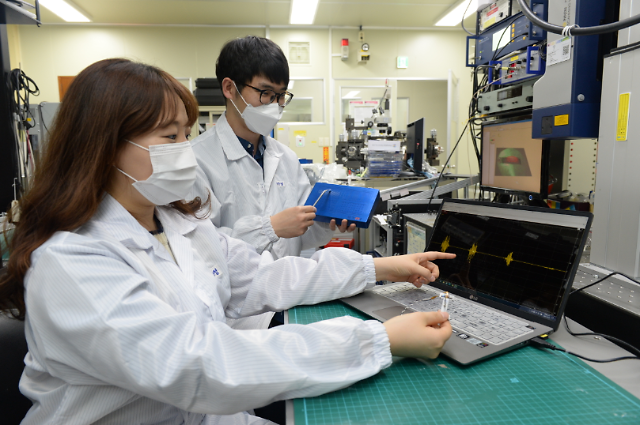 SEOUL -- A new tele-haptic technology developed by a team of domestic and foreign researchers has great potential as it can be applied to virtual reality and augmented reality environments. In surgery training sessions, medical students can feel the texture of a virtual cancerous tumor without an actual sample.

Developers regard their technology as a key factor in the upcoming market for virtual reality (VR) and augmented reality (AR). Tele-haptic technology can be used to provide realistic experiences for VR and AR users. For example, real-time vibrations and shocks can be delivered to an audience wearing tele-haptic gear during a VR show. It can also be used for connecting family members and friends who are far away by allowing them to interact and touch each other.

Tele-haptic is a term used for computer-generated tactile sensations over a network between two physically distant endpoints. Sensors read information to input tactile data into microcontrollers. Transferred data is generated into sensations using control effectors. Tele-haptic technology often involves kinesthetic sensors that detect the position and movement of body parts. Researchers said that there is a lot to work on commercialization but they roughly speculate that it could take about five years.

The state-funded Electronics and Telecommunications Research Institute (ETRI) said in a statement on April 22 that ETRI researchers teamed up with those from the Korea National University of Transportation and the University of Texas at Dallas to develop a next-generation tele-haptic technology-based sensor-actuator system that can wirelessly deliver tactile sensation from a sensor to a receiver that is 15 meters (49 feet) away.

Sensors and actuators used piezoelectric technology. The receiver device that consists of piezo-electric actuators allows users to feel tactile sensations as if they are actually touching the surface of materials being scanned by sensors. Piezo-electric technology uses the electric charge that accumulates in certain materials. Microphones and loudspeakers use piezoelectricity for the input and the output of sounds.

"This technology will become very useful in the era of VR and AR. Medical school students can touch, feel, and study a ruptured varicose vein or a cancerous brain tumor through VR surgery classes without the need of actual samples," ETRI researcher Jin Han-bit told Aju Business Daily. "The tele-haptic technology has a huge potential. It can be used to provide realistic experiences of VR and AR services."

Bluetooth wireless communication can be used to connect devices. The tele-haptic system can wirelessly hook onto smart devices that are already interlinked to a WiFi or 5G network. "Theoretically, the tele-haptic system has no boundaries. It can deliver tactile sensations to a person in another country using internet networks," Jin said.

Because the size of tactile sensory data is smaller than that of voice calls, it has a latency of about 200 microseconds. The input and output of sensations are made almost instantly, Jin said, adding that two people wearing full tele-haptic systems can interact, touch, and feel each other remotely.