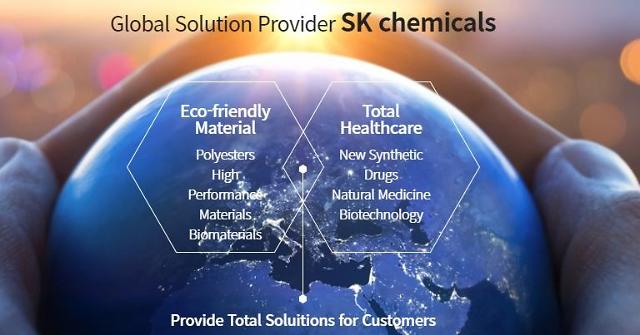 
SEOUL -- In a bid to gain the upper hand in competition with domestic and foreign rivals in the eco-friendly plastic material market, SK Chemicals, a unit of South Korea's third-largest conglomerate SK Group, is moving fast to embark on the early commercial production of flexible and biodegradable polylactic acid.

SK Chemicals has apparently adopted an aggressive strategy to start the commercial production of flexible and biodegradable polylactic acid (PLA) this year, probably through a joint venture with other affiliates and joint facility investments.

"We are currently in the process of reviewing business models," an unnamed SK Chemicals official told Aju Business Daily. "We can say certainly that our PLA has differentiated competitiveness in markets." The company's strategy followed a protracted patent war between the battery-making units of SK and LG groups that came to an end in April when they reached a last-minute compromise through negotiations mediated by the administration of U.S. President Joe Biden.

Competition has been intense between the two major conglomerates in other fields, with SK Group chairman Chey Tae-won taking a more aggressive step.

Bioplastics can be made from agricultural by-products and also from used plastic bottles and other containers using microorganisms. LG Chem was the first to develop flexible PLA, but it aims to start commercial production in 2025. In October 2020, LG Chem claimed to have developed a new biodegradable material using corn-based glucose and crude glycerol that can realize mechanical properties equivalent to synthetic resins for the first time in the world.

LG Chem said its new material can be applied in many other fields such as plastic bags, air cap buffers, disposable cups, foaming products and mask felts where there is a growing demand for biodegradable materials. LG Chem has also tried to commercialize polybutylene adipate terephthalate (PBAT), a biodegradable random copolymer that makes it ideal for combination with other biodegradable polymers.

Many degradable plastic products have failed to attract attention because of their weak durability, while some bioplastics are very brittle compared to those made from fossil fuel.

In early April, SKC, a polyester film and chemical material manufacturer, tied up with CJ Cheil Jedang to develop a flexible and durable bioplastic material for the packaging of food products by utilizing the characteristics of PLA and polyhydroxyalkanoates (PHAs), which are produced by bacteria during the fermentation process of sugar or lipids including fats, oils and waxes to store carbon and energy. PHAs can be used with other monomers to create different types of bioplastics that break down over time. PHAs are 100 percent biodegradable even in seawater.