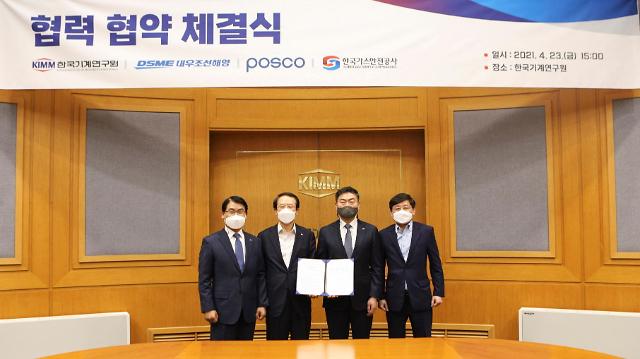 [Courtesy of the Korea Institute of Machinery and Materias]

The Korea Institute of Machinery and Materials (KIMM) said it would use high manganese steel (HMS) for liquid hydrogen storage tanks because it is easier to weld and has lower manufacturing costs than stainless steel. The liquefaction of hydrogen requires cooling to a temperature of minus 253 degrees Celsius and subsequent storage in cryogenic containers.

The institute said it has signed a memorandum of understanding with Daewoo Shipbuilding & Marine Engineering (DSME), POSCO and Korea Gas Safety Corp. (KGS). "We will actively cooperate to help domestic companies lead the liquid hydrogen storage tank sector in the global market by utilizing our infrastructure," KIMM head Park Sang-jin said in a statement on April 23.

KIMM said it would support performance evaluation at its testing and certification center in the southeastern city of Gimhae. Through joint research with DSME, a major shipbuilder, POSCO has developed a liquefied natural gas (LNG) storage tank using HMS that can withstand temperatures as low as minus 253 degrees Celsius.

POSCO's HMS has been approved by the International Maritime Organisation (IMO), a U.N. maritime safety agency. It is cost-effective and showed superiority over existing cryogenic materials in terms of elongation and ultimate tensile strength.