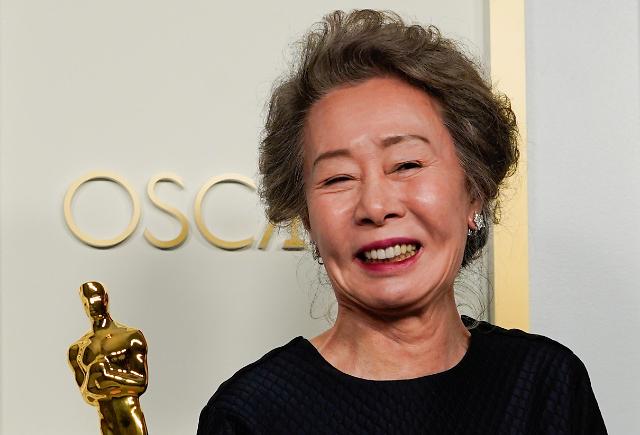 SEOUL -- "I don't know if this moment is the best in my life. The Academy isn't everything. Is it?" This is what actress Youn Yuh-jung revealed her frank thoughts just after the 73-year-old grabbed an Oscar trophy for Best Supporting Actress for her role in the 2020 film "Minari" directed by Lee Isaac Chung.

Youn earned enormous praise from fans, including President Moon Jae-in, as the first Korean and second Asian actress to take the trophy. In Minari, she played "Sunja," a foul-mouthed granny who migrated to the United States to help her daughter and family settle in rural Arkansas.

"I really hate the word 'best.' Everyone says that being the No. 1 and the best is nice, but why can't we be the nicest somewhere in the middle?," the actress with a greedless face asked South Korean reporters at a press conference held in Los Angeles on April 27 after the 93rd Academy Awards

Minari, which means water celery in Korean, is a commonly found edible plant in the wetlands of East Asia. It has the ability to disperse its kind very quickly and wide with roots planted anywhere there's moisture. The water celery is also used as the main and versatile ingredients of many traditional dishes in South Korea, China and Japan.

Through some 100 films and drama series, she often portrayed characters which other actresses wouldn't take because such roles did not quite fit into stereotypes of the South Korean women who are obedient housewives and good mothers. Picking the wrong character could ruin the image of an actress.

"I started my acting career by memorizing scripts so that I don't cause any problems for others. Scripts were like the Bible for me. Anyways, I tried hard. I just tried a lot," Youn said.

Youn received the spotlight for her role in the 1971 thriller film "Woman of Fire" where she played a spiteful young housemaid who set out to destroy a family. Her roles in other films include a housewife who became a private escort, an old prostitute who unexpectedly became a "mercy killer," and an ambitious "Chaebol" heiress. Ironically, Youn is among South Korea's iconic actresses who have no match in portraying the role of a typical South Korean mother devoted to her family.

In contrast to the shiny golden trophy that was displayed on the table at the presser with Korean journalists, Youn stressed once again that she does not know if the moment of winning the Oscar trophy is the best in her life or it will bring any changes in the future. "I have no plans for the future. I will just live on as I always do. It's not like I will suddenly turn into Kim Yuh-jung from Youn Yuh-jung just because I won an Oscar."

Her only hope is simple. She wants to keep acting as long as she can. "I don't want to become a public nuisance to anyone. So I think it would be wonderful if I could carry on acting until the point which I don't cause any inconveniences."