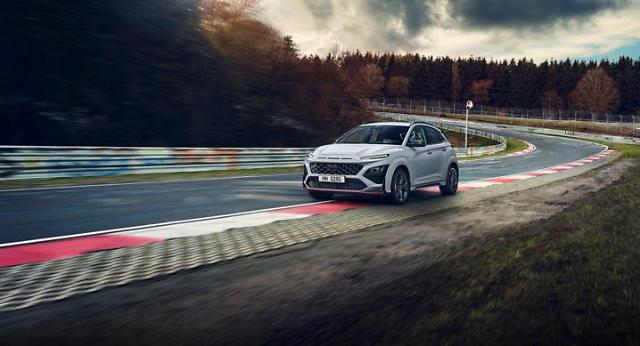 Hyundai's motorsport "N" brand was launched in 2015 to create pumped-up versions of so-called "fun cars." N benchmarked other high-performance brands. Three N compact hatchback models -- i20 N, i30 N, and Veloster N -- were released over the last five years. N vehicles drew applause from both the motorsport specialists and consumers for their performance and quality.

Hyundai introduced Kona N through an online showcase event on April 27. The hatchback's 2.0-liter turbo GDI engine has a turbine wheel 5 millimeters larger in diameter than its normal version brother model. It also has turbine cooling channels with an increased surface area. The enlarged turbo wheel and cooling channels were designed to increase both the performance output and the durability of the engine. The compact SUV also has a dual-clutch transmission (DCT) to have a total output of up to 290 horsepower.

The carmaker also applied a 10-inch display specially designed for the N version Kona. Hyundai said that the display would show video-game-like visuals to spice up the driving mood of the driver. The compact SUV is fitted with a head-up display (HUD) so that the driver can gain access to all necessary graphic information without turning his or her head away from the windshield.

Kona N features an exclusively designed front grill bearing the N logo. The front bumper's air ducts were inspired by those of a jet fighter, Hyundai said, adding other aero parts such as the front lip spoiler, double wing-type rear spoiler, and side seal moldings increase the downforce of the vehicle while driving at high speeds to enhance the stability.

During the online showcase, the carmaker also introduced "Never just drive," a new slogan for the N brand, and said that Hyundai will continue to carry on to seek fun in driving even in the era of future clean energy vehicles.

According to Thomas Schemera, Hyundai's Vice Executive President, the company has been working on the realization of the company's visions to create high-performance vehicles that run on sustainable energy for the last six years.