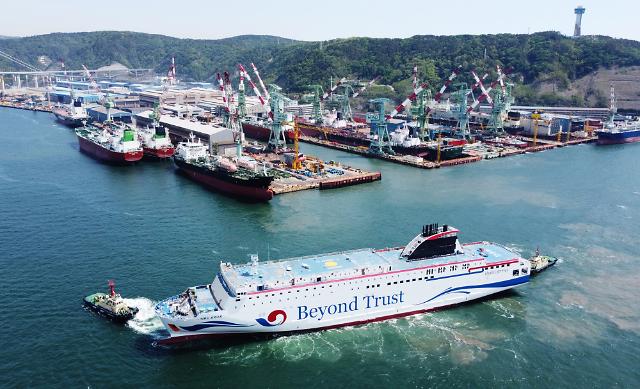 
SEOUL -- A 27,000-ton ferry equipped with various safety facilities was launched for operation on a sea route which was suspended following the tragic 2014 sinking of a ship packed with high-school students. The new ferry named "Beyond Trust" maximized resilience with low-weight and low-center design.

The new Ro-Pax ferry built at Hyundai Mipo Dockyard in the southeastern port of Ulsan will be delivered to its owner, Hydex Storage, in September for operation on the route between the western port city of Incheon and the southern resort island of Jeju. It is 70 meters long, 26m wide and 28m high. Ro-Pax ferries provide maximum efficiency and the seamless transfer of vehicles, cargo and passengers.

The new ferry features various safety facilities such as a satellite navigation device for emergencies such as flooding and fire, as well as automatic fire alarms, sprinklers, and a marine evacuation system. It is powered by two powerful engines that can reduce nitrogen oxide emissions.

Beyond Trust carrying 850 passengers, 487 cars and 65 containers can operate at a maximum speed of 23.2 knots (43 kilometers) per hour. It is installed with various amenities, unlike the Sewol which was carrying 476 people, including 325 high school students, when it sank in 2014, a total of 295 bodies were recovered.

The disaster was blamed on the ship's illegal redesign and overloading left unchecked by regulators. Government officials and coastguard authorities were criticized for failing to take quick steps. It played a role in the fall of jailed ex-president Park Geun-hye who was accused of manipulating state records to avoid criticism that she neglected her duty to supervise a crucial rescue operation.

As a culprit behind a corruption scandal that revealed deep-rooted collusive ties between businessmen and politicians, Park received a 24-year jail sentence.