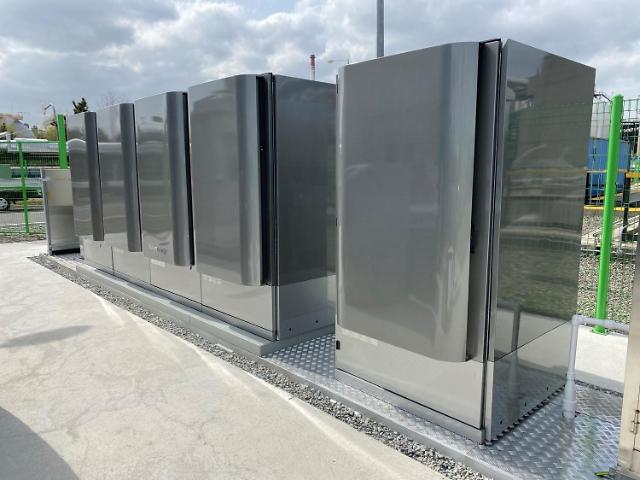 SEOUL -- SK E&C, a builder affiliated with South Korea's third-largest conglomerate SK Group, has embarked on the demonstration of a solid oxide fuel cell (SOFC) power generation facility running on byproduct hydrogen. The demonstration aims to see if the fuel cell generator system is fully self-sustainable and carbon-free. The builder will accelerate its SOFC business through the commercialization of related technologies.

Polymer electrolyte membrane fuel cells (PEMs), also known as proton-exchange membrane fuel cells (PEMFCs), are mainly used for transport applications and small-sized power generation facilities as they operate in relatively low temperatures at around 93 degrees Celsius (200 degrees Fahrenheit). A PEM consists of a polymer electrolyte membrane sandwiched between a positive electrode (cathode) and a negative electrode (anode). The electrical efficiency of PEM is about 40 percent.

SOFCs are more ideal for middle to large-sized power generation facilities as they operate at a much higher temperature of about 1,000 degrees Celsius with an electrical efficiency of up to 80 percent. The fuel cell uses a dense layer of ceramic as an electrolyte. SOFCs use common gas such as hydrogen as the main source of fuel. Hydrogen is commonly created as a byproduct at factories through petrochemical processes including the propane de-hydrogenation (PDH) process that removes hydrogen from propane to create propylene.

SK E&C said in a statement on April 28 that the company partnered with Bloom Energy, an American fuel cell maker, and SK Advanced, a propylene maker, to demonstrate a 100 kilowatt-class SOFC power generation system at SK Advanced's PDH plant in the southern port city of Ulsan.

"Through this demonstration, we will achieve the world's top-class power generation efficiency and stability to provide zero-carbon electricity," SK E&C CEO Ahn Jae-hyun was quoted as saying. Ahn's company is in charge of engineering, procurement, and construction (EPC) in the demonstration project. Bloom Energy manages the supply of SOFC while SK Advanced provides by-product hydrogen.