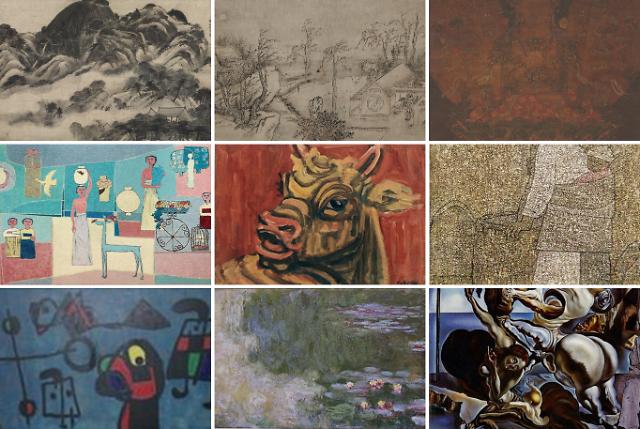 SEOUL -- The vast art collection that heirs of the country's biggest conglomerate Samsung pledged to donate has turned out to be a treasure trove of national treasures and masterpieces by renowned artists here and abroad.

Late Samsung Group chief Lee Kun-hee's family announced that they would pay more than 12 trillion won ($10.7 billion) in inheritance taxes, the largest amount in the country's history. They also unveiled plans to donate one trillion won to support the ongoing virus fight and research for rare child diseases, as well as some 23,000 pieces of his art collection, estimated to fetch around two trillion won.

"The late Chairman Lee's collection of antiques, Western paintings and works by Korean artists -- approximately 23,000 pieces in total -- will be donated to national organizations in recognition of his passion for collecting and his belief in the importance of passing on our cultural heritage to new generations," the conglomerate said in a statement.

A majority of the artworks -- 21,600 of the total -- up for donation to the National Museum of Korea are antique pieces and cultural artifacts that date back centuries ago to the Goryeo (918~1392) and Joseon (1392~1910) dynasties. Apart from the corporate empire he built, the late entrepreneur was an art enthusiast whose collection could easily match that of a top-tier museum. The senior Lee, considered to own the biggest collection of South Korea's national treasures among individuals, was especially fond of antique artworks.

One of the most notable pieces up for donation is the Joseon-era landscape painting "Inwang Jesaekdo" by legendary painter Jeong Seon. Designated as National Treasure No. 216 in 1984, the masterpiece depicts a scenic landscape of Mount Inwangsan in central Seoul after rain.

Measuring 138.2 centimeters in width and 79.2 cm in height, this piece is considered the most prominent of Jeong Seon's 400 pieces of work, according to the Cultural Heritage Administration (CHA). The agency noted how the painter moved away from Chinese styles and created unique themes based on Korean scenes and experimented with creative techniques.'

Also among the 1,600 contemporary pieces that will be donated to the National Museum of Modern and Contemporary Art (MMCA) are historic artworks by Korean painters Park Soo-keun, Kim Whan-ki and Chang Ucchin.

While most of the contemporary collection will head to the MMCA, the conglomerate said that some will be donated to museums in provinces outside of Seoul that are the hometowns to some of the painters. A few of them will also be donated to museums of artists like Lee Jung-seob and Park Soo-keun. The planned donation is seen as a major boon to the national gallery, which does not own prominent pieces by these artists. The MMCA, for instance, does not have a single Picasso or Monet painting in its collection.

"The donation is anticipated to contribute to preserving domestic cultural assets and enhance the public's rights to enjoy culture and research in the field of art history since a massive donation to the country, which includes cultural assets, is unprecedented," the group said in a Korean-language statement.

Some works that pundits had forecast to be donated, such as pieces by Western painters and sculptors like Alberto Giacometti, Mark Rothko and Francis Bacon, were excluded from the final list. (Yonhap)