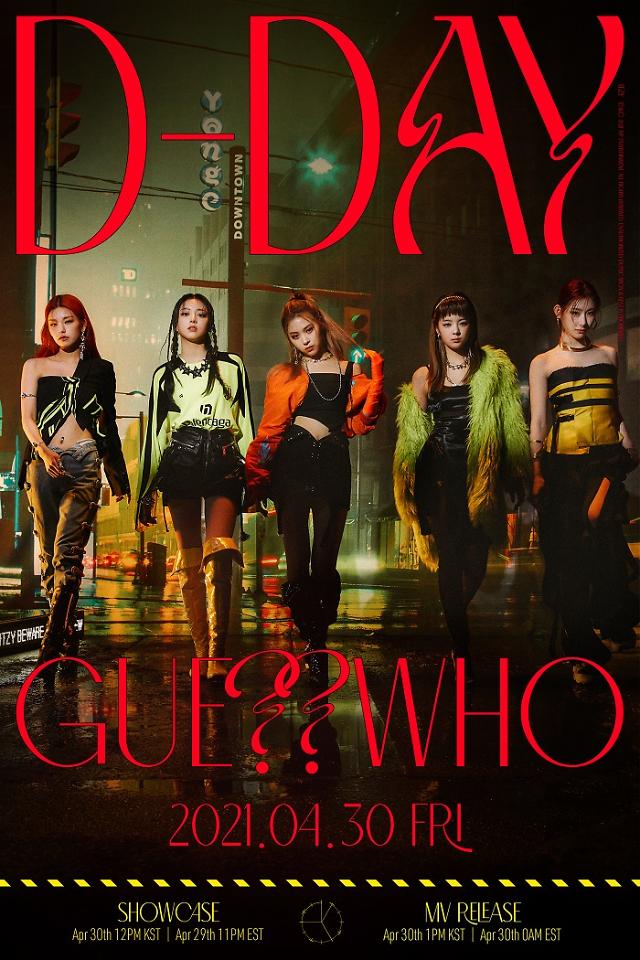 
SEOUL -- As a representative teen crush K-pop girl band of MZers (millennial and Z generations), ITZY will show a more powerful and bolder image than before through "GUESS WHO," a new mini-album released in eight months. The band hopes to secure a spot in Billboard 200, an American record chart.

"Teen Crush, the concept that we've brought since our debut, is always the basis. I hope our growth in this album will be well imprinted," Ryujin said in an online press conference ahead of the worldwide release of "GUESS WHO" on April 30.

The six-track new album added a sense of pageant and tension to the image of ITZY, which debuted in 2019 with the message "I love myself." "Our characteristics of MZers are confidentness and frankness. ITZY has delivered such a message through songs since its debut, and it is also included in this album. I hope we can build a consensus with more people through the new album," said Ryujin.

With a re-recorded English version, the band will seek to enter Billboard 200. "It would be a great honor to be on the Billboard 200 chart," Ryujin said, anticipating greater love and attention with "GUESS WHO" which refers to a person who stimulates curiosity.

"Mafia in the Morning" is the new album's lead track written and composed by JYP founder Park Jin-young. It is an abbreviation for an inevitable morning and likened the message "I will approach you with my feelings veiled away and take the heart of my loved one" to a mafia game.

"Members belong to the MZ generation, and I think it's because fans who live together in youth sympathize with our expressions and messages," Yeji said. "It's an album that's wilder and bolder than before. You can see ITZY's visuals and emotions changing over time and space."

The five-member band has earned the title of "Super Rookie" with hit songs such as "DALLA DALLA," "ICY," and "WANNABE." However, Yeji thinks there's a long way to go. "If there's anything I want to accomplish carefully, I'd like to hear that ITZY always exceeds expectations."

Yuna revealed her will to show ITZY's potential and limitlessness. Chaeryeong said ITZY would work hard to become a group suitable for such modifiers as "Representative icon of MZ generation" and "Girl group representing 4th generation." She wants to get a different modifier such as "Fan shooter" or "Representative K-pop performer" who burns spirits.