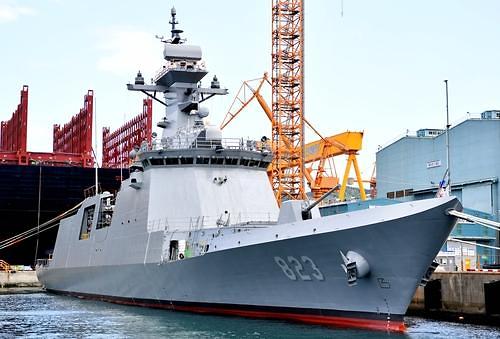 [Courtesy of the Navy]

SEOUL --A new 2,800-ton frigate armed with anti-submarine and tactical guided missiles was launched in a ceremony at the shipyard of Daewoo Shipbuilding & Marine Engineering, a major shipbuilder in South Korea. The frigate named "Daejeon" features a hybrid propulsion system to reduce underwater radiated noise and a towed array passive sonar system.

Daejeon is the fifth FFX Batch II frigate which is 122 meters long, 14 meters wide and 34 meters high. The first ship of the class capable of sailing at a speed of 30 knots was commissioned in 2018. The FFX Batch II frigates that can accommodate a maritime helicopter are mounted with missiles and Hong Sang Eo (Red Shark) torpedos.

A ceremony was held on May 3 at the shipyard of Daewoo Shipbuilding & Marine Engineering (DSME) to launch the Daejeon warship that would join a navy fleet of frigates in late 2022.

The 129-meter-long third batch frigate can displace 3,500 tons, feature a phased array radar, and sail at a speed of 30 knots with 120 personnel on board. The first Batch III frigate with powerful radars and an electro-optical targeting system is scheduled to enter service in 2024. It will be armed with a five-inch main gun and missiles including Haegung (sea bow) which was designed to intercept missiles and aircraft.

South Korea has stepped up the construction of frigates with enhanced war capacities following the sinking of its Pohang-class corvette, Cheonan, on March 26, 2010, near a front-line island in the Yellow Sea that killed 46 seamen. International experts concluded that Cheonan had been sunk by a North Korean torpedo.