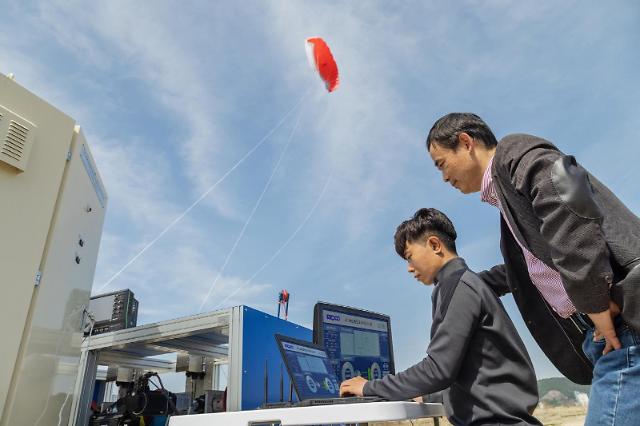 
SEOUL -- Winds at higher altitudes are steadier, more persistent and of higher velocity. A government-funded research body has teamed up with South Korea's state electric utility KEPCO to demonstrate aerial wind power generation on an artificial island in the southeastern city of Changwon.

There are two types of power generation: generating electricity from the sky or using kites or gliders that pull the rope in the air to rotate a ground drum. The Korea Electrotechnology Research Institute (KERI) has carried out joint research with KEPCO to secure source technologies.

The institute signed a memorandum of understanding with KEPCO and Changwon City for cooperation in the demonstration and commercialization of power generation using high-altitude winds. KEPCO supports the budget so that KERI would conduct research and development, while Changwon provides a testbed.

"Aerial wind power generation is very applicable because it can build systems of various capacities from mobile to large-scale power generation, depending on the purpose and location of utilization," Lee Ju-hoon, a senior KERI researcher, said in a statement on May 4, promising to realize automatic driving technology that combines artificial intelligence and build a demonstration complex that can work with electricity-related companies.

The advantages of aerial wind power generation over tower-type wind turbines, which are limited by various topographical, economic and natural environmental problems, are greater potential for energy sources and fewer restrictions on places, KERI said.