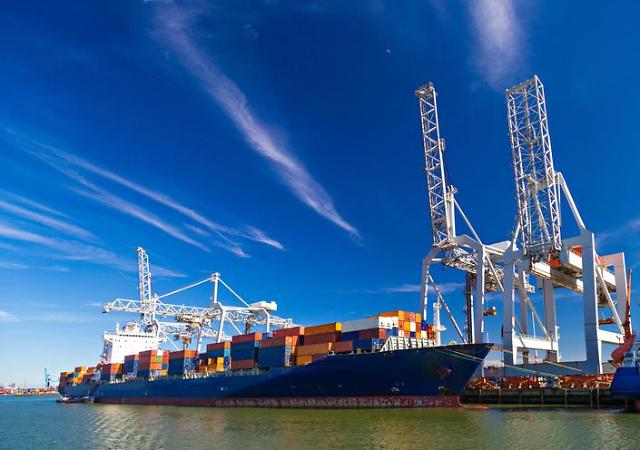 SEOUL -- The southern port city of Ulsan was selected to host a 43 billion won ($38 million) state project that aims to demonstrate and test the efficacy of an artificial intelligence-based marine logistics platform. When commercialized, the platform will help the digital transformation of ports to increase work efficiency and cargo processing speed.

South Korean ports mainly rely on the manual operation of machinery, including cranes and forklifts, and cargo tracking. The need for an efficient marine logistics management platform is higher than ever as cargo volume at major ports grows fast due to skyrocketing global cargo demand.

Ulsan said in a statement on May 7 that the Ministry of Science and ICT has selected the port city and Ulsan ICT Promotion Agency to lead a three-year project to test an AI-based marine logistics platform. Ulsan will form a consortium involving 15 teams from universities including the Pohang University of Science and Technology (POSTECH), research centers and companies such as Hyundai Heavy Industries, South Korea's steel group Posco.

The consortium will develop an AI-based inertial navigation system (INS) and digitalize marine logistics information. The demonstration will test technologies that can reduce operating costs of roll-on and roll-off vessels designed to carry wheeled cargo. Vessel equipment including lidars and automatic radar plotting aid (ARPA) will be developed, localized and upgraded.

"This demonstration will pioneer the future high-value vessel market by offering new engines of growth," Ulsan Mayor Song Cheol-ho was quoted as saying. The port city thinks the project will create an economic value of 700 billion won over the next 10 years after commercialization.

South Korea has accelerated the digitalization of ports. Busan, the world's fifth-busiest port, has established a local 5G network to connect remote-controlled cranes and unmanned loaders. Drones are operated to monitor the structural safety of dock facilities and illegal activities. Blockchain, an unhackable virtual ledger system, was adopted to track cargo.