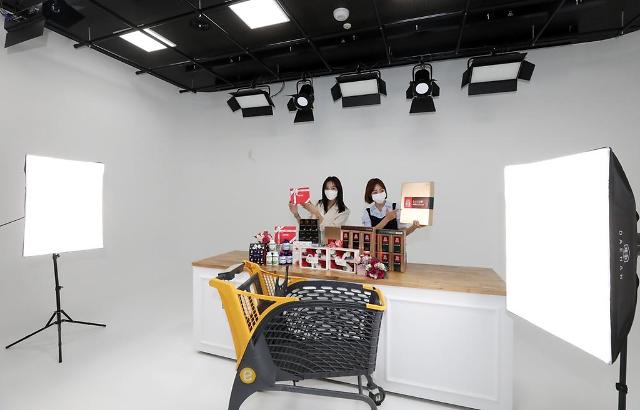 SEOUL -- In a bid to lead the domestic live commerce market estimated at 2.8 trillion won ($2.5 billion), the megastore wing of Shinsegae, a retail conglomerate in South Korea, has opened a multi-purpose studio with top-notch equipment that will help small and medium-sized business owners to carry out mobile shopping shows like TV home shopping channels.

The interactive shopping platform garnered popularity because show hosts were able to communicate with the audience in real-time. Customers could ask questions about products. According to data released by Kyobo Securities' research center, the domestic live commerce market is projected to reach 10 trillion won in 2023.

Emart said in a statement on May 11 that the company has opened a broadcast studio at its headquarters in Seoul to film live commerce shows for SSG.com, Shinsegae's integrated online shopping mall.

Along with Shinsegae, other online and mobile shopping mall operators have gone full throttle to capture MZers. In early 2021, Kakao, South Korea's web service giant, increased the number of broadcasts to more than five times a day. Coupang, the South Korean counterpart of Amazon, made a foray into the market in March.