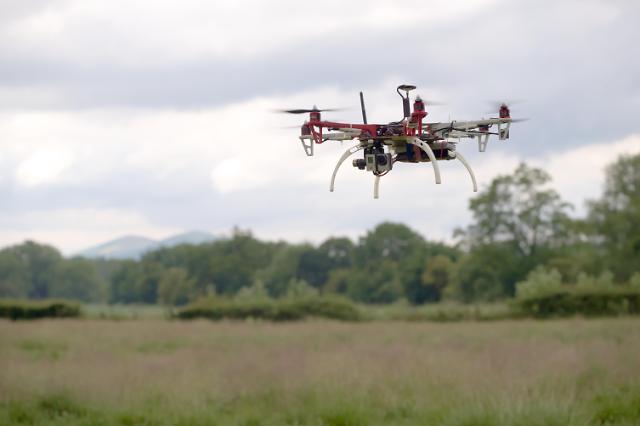 
SEOUL -- South Korea's state agency for research and development in defense technology has developed a technology that allows unmanned aerial vehicles to autonomously avoid external threats and obstacles. The technology can be used in many sectors including aerial mobility for transportation such as drone taxis.

Unmanned aerial vehicles (UAVs) and smaller drones are capable of reaching their destination autonomously. However, it is hard for flying vehicles to detect hazards such as high-rise buildings and large trees in real-time and navigate around them. The flight course has to be set on a path that does not cross any hazard or a human pilot should control a UAV remotely to avoid any collision.

The Agency for Defense Development (ADD) controlled by the Defense Ministry said in a statement on May 11 that through a four-year project, it has developed an autonomous navigation technology for drones. The technology allows UAVs to autonomously set an optimized and safe path to their destination. It uses a sensor to collect external information and automatically generates an algorithm for navigation.

"We will continue to develop technologies such as an artificial intelligence-based technology capable of recognizing strategic situations, and an optimization technology for the simultaneous operation of multiple drones," the agency said.

Autonomous UAV technology can effectively improve the survivability of military drones during missions on future battlefields, the agency said, adding its technology can be applied to the civilian sector and provides a technical basis for developing a safe operating system for UAM services.

UAM is an ecosystem covering personal air vehicles (PAVs) and infrastructure such as a new navigation system, take-off and landing fields, and charging technologies. PAVs or flying cars are emerging as a future system of travel to avoid traffic jams on urban roads as the doorstep-to-doorstep average speed for cars is predicted to degrade further.

UAM Team Korea, a public-private consultative body, was launched in 2020 to commercialize drone taxis in 2025 under a government road map in which South Korea will enact a special law to introduce an ecosystem covering personal air vehicles ahead of other countries. There are still tasks to be solved, such as safety and social receptivity, but if unmanned autonomous navigation is applied, these problems can be solved and drone taxis will take a step closer to commercialization.
© Aju Business Daily & www.ajunews.com Copyright: All materials on this site may not be reproduced, distributed, transmitted, displayed, published or broadcast without the authorization from the Aju News Corporation.