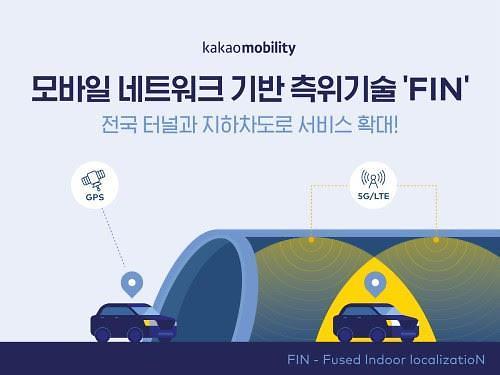 SEOUL -- The mobility service wing of Kakao, a web service giant in South Korea, has commercialized an indoor positioning system that  will help drivers know their whereabouts inside some 1,300 expressway tunnels and other underground road infrastructure across the country. It can reduce ghost bottleneck phenomena that often take place at the ends of tunnels.

Smartphone navigation app services based on global positioning system (GPS) are widely used by about 72 percent of drivers in South Korea, according to 2020 data released by Korean Click, a market research company. However, such satellite-based services get lost when a car enters a GPS signal blind spot such as tunnels or indoor parking lots.

Kakao Mobility said in a statement on May 11 that the company commercialized "fused indoor localization (FIN)," a 5G and 4G mobile communication network-based indoor positioning technology developed by Kakao, through "Kakao Navi," a smartphone navigation app. The company said that FIN can accurately track the movement of a vehicle in an area where satellite signals cannot reach.

The FIN technology was tested at three urban motorway tunnels in southern Seoul in 2020. Through the test, Kakao found that FIN helped drivers find the right route when they exit the tunnels. The system will also help drivers navigate on mountain roads.