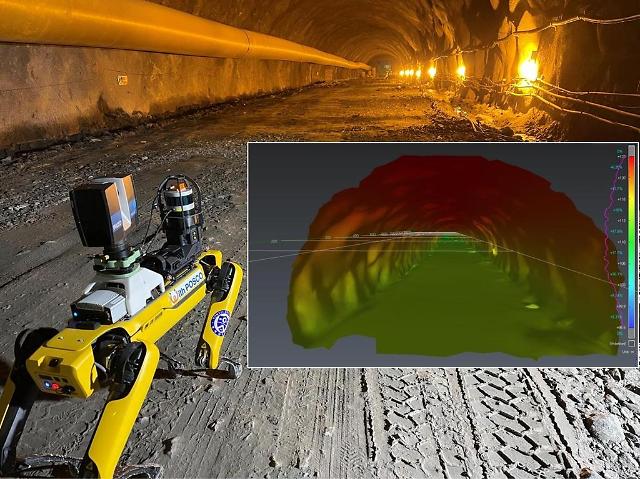 SEOUL -- POSCO E&C, a construction arm of South Korea's top steelmaker, has deployed a legged robot based on Boston Dynamics' dog-like bot at its tunnel construction site to check for cracks and construction errors that could cause disastrous accidents. The autonomous robot was jointly tweaked by the builder and a Yonsei University team to equip high-performance cameras and a lidar system that measures distance by illuminating the target with laser light.

Spot, a four-legged robot developed by Boston Dynamics, is a small-sized robot that has been used by research institutes and companies as a basic test platform for add-on devices such as sensors and cameras. GS Engineering & Construction, a Seoul-based builder, used it to collect data at construction sites for the first time in South Korea in 2020.

POSCO E&C said in a statement on May 13 that the test robot played the role of preventing accidents by checking the interior of tunnel construction sites for any safety hazard before workers go in after blasting. The dog-like bot using legs is capable of reaching bumpy surfaces filled with rock debris. The inspector bot is the brainchild of joint work by POSCO E&C and a Yonsei University team.

The builder has demonstrated the robot at an expressway tunnel construction site northeast of Seoul as part of a campaign to accelerate the adoption of smart construction technologies such as unmanned robots and drones that would improve work efficiency and manage the safety of workers.

Four-legged robots or leg-wheel-type robots are being developed by global robot makers and tech companies for their versatility. Unlike their wheeled or tracked brothers, legged robots can move through extreme terrain including rocky boulders and narrow mountain trails. In cases of emergency, they can move faster in severe terrain conditions to carry heavy cargo or patients.