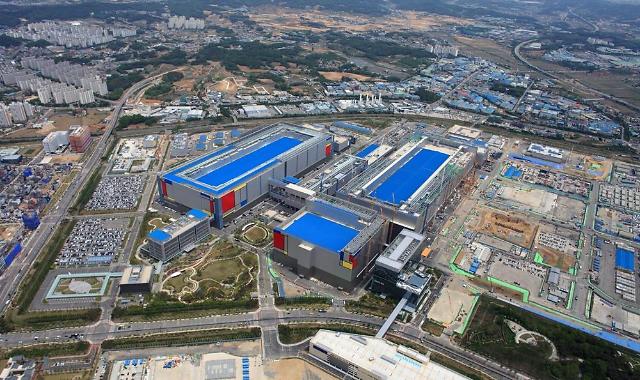 
SEOUL -- In response to the aggressive expansion of production capacity by its Taiwanese rival, Samsung Electronics will increase investments in System LSI and foundry businesses to 171 trillion won ($151.3 billion), saying the global semiconductor industry faces a "watershed" moment due to competition to secure a competitive edge.

The additional investment represents an increase of 38 trillion won from the previous commitment of 133 trillion won unveiled in April 2019 to become a global leader in not only memory semiconductors but also logic chips. Samsung has been locked in a battle of technical skills with Taiwan Semiconductor Manufacturing Company (TSMC), a top player in the global foundry market.

LSI, also known as Large-Scale-Integration, is a chip-making process in which thousands of transistors are integrated or embedded onto a single silicon chip. Foundry refers to a semiconductor fabrication plant operation.

"The entire semiconductor industry is facing a watershed moment and now is the time to chart out a plan for long-term strategy and investment," Samsung's device solutions division Kim Ki-nam said in a business meeting on May 13 in Pyeongtaek where a new production line is under construction.

TSMC will make investments worth $100 billion over three years. Intel, an American technology giant, followed suit with the expansion of investment in the foundry business. Samsung is considering expanding its foundry plant in Austin.

"There is also a strong chase in the memory sector, where South Korea has always maintained its lead," Kim said, referring to China's push for the expansion of microchips. "We will take the lead in preemptive investment to widen the 'super gap' that can never be matched, rather than focusing on defense."

Samsung's new production line in Pyeongtaek, about 60 kilometers (37 miles) south of Seoul, will be completed in the second half of 2022 to produce high-performance chips such as 14-nanometer DRAMs and five-nanometer logic semiconductors, both based on extreme ultraviolet (EUV) lithography technology.