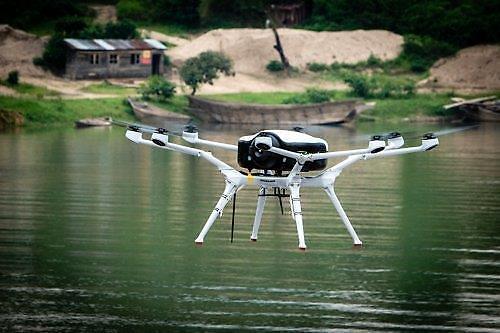 SEOUL -- Through an experimental rapid acquisition program, South Korea's military will adopt and put a low-noise hydrogen fuel cell drone into a test operation. The surveillance and patrol drone can fly longer than its battery-powered brothers and make less noise than gasoline-powered unmanned flying vehicles.

Drones are widely used in South Korea in various sectors including military, construction, building maintenance, and wildlife monitoring sectors. However, the so-called "eyes in the sky" devices are not very discreet. People can tell whether a drone is flying nearby because of its loud buzzing sounds. Many drones are battery-powered while some special-purpose drones have a gasoline engine attached to a generator or directly to rotors.

The Defense Acquisition Program Administration (DAPA), a state arms procurement agency controlled by the defense ministry, said in a statement on May 17 that hydrogen fuel cell drones produced by Doosan Mobility Innovation, a drone solution provider, would be demonstrated in November. DAPA said that the drone equipped with electro-optical devices and an infra-red thermal imaging camera should stay up in the air for up to 90 minutes.

The experimental rapid acquisition program is designed to save development costs and time by adopting technologies developed in the private sector and modifying them for military use. "We hope that more companies capable of providing new technologies to participate in the program so that the military can try various new technologies," Choi Ho-cheon, a DAPA official, was quoted as saying.

Starting with the drone, DAPA would try to apply hydrogen power sources to a variety of military equipment including large-sized drones, vehicles, and armored personnel carriers.