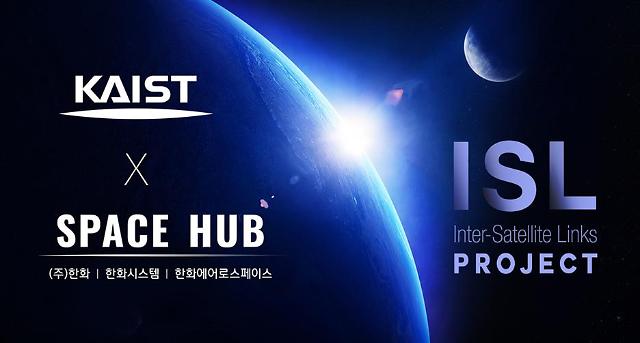 The group said it would inject some 10 billion won (8.8 million) into the center set up by the Korea Advanced Institute of Science & Technology (KAIST) and Space Hub, a group-wide team led by Hanwha Solutions president Kim Dong-kwan, the eldest son of group chairman Kim Seung-yeon. The team will combine different products or services such as satellite components from Hanwha Systems and Satrec Initiative, a domestic satellite company controlled by Hanwha Aerospace.

The first research project is to develop laser inter-satellite links (ISL), an essential technology for implementing communication services through low-orbit satellites. ISL technology allows multiple satellites to quickly process high-capacity data while exchanging data with lasers. Internet supply is possible even in airplanes, ships, or areas without electricity. The technology can be used immediately for satellite communication and urban air mobility (UAM).

UAM is an ecosystem covering personal air vehicles and infrastructure. Hanwha Systems is a key member of UAM Team Korea, a public-private consultative body that would commercialize drone taxis in 2025. With its American partner, Overair, Hanwha Systems aims to test an air taxi capable of flying at a maxim speed of 320 kilometers (199 miles) per hour.

Hanwha Systems has localized key components to lighten the payload of the midsized satellite. Light payloads will allow multiple satellites to be loaded into one projectile and create a cluster of satellites that can be connected to provide an integrated communication system and exchange observational information. South Korea has disclosed the goal of producing 11 small satellites weighing under 100 kg in a space program.