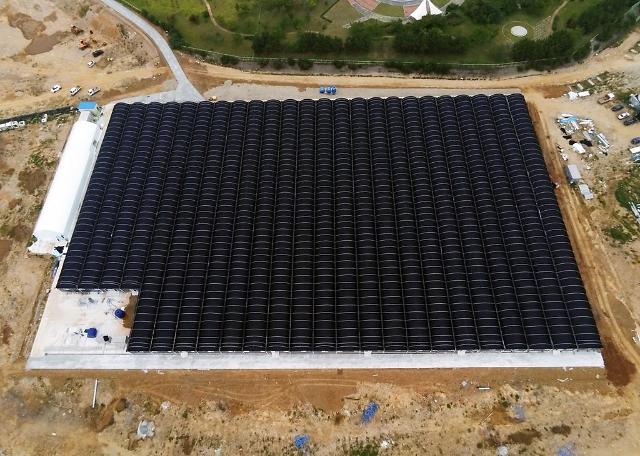 
SEOUL -- An eco-friendly aqua shrimp farm that uses wastewater from a nearby thermal power plant for heating was kicked into operation. The 16,270-square meter farm sized about three football fields is South Korea's largest land-based aquafarm.

Thermal power plants suck in water from a nearby water source such as a river or a lake for cooling. Coldwater is heated during the process before it is released back to the source. The wastewater can cause some serious damage to surrounding environments as it could raise water temperature.

South Chungcheong Province said in a statement on May 25 that Dangjin Farmers, an eco-friendly farm operator, started the operation of an environmentally-friendly shrimp farm near a thermal power plant in Dangjin some 75 kilometers (46 miles) southwest of Seoul. The farm built on the plant's fly ash storage yard uses residual heat from wastewater to reduce operating costs used in heating fish tanks. About 10.1 billion won ($8.9 million) was injected into the project.

The farm is equipped with a smart management system that autonomously monitors and controls the temperature and salinity of water in 90 fish tanks to cut labor costs. The farm will produce 125 tons of shrimp annually. The smart management system is capable of using different types of farming including a non-antibiotic farming technique using microbiomes that break down pollutants inside tanks to raise healthy shrimps without using medications.