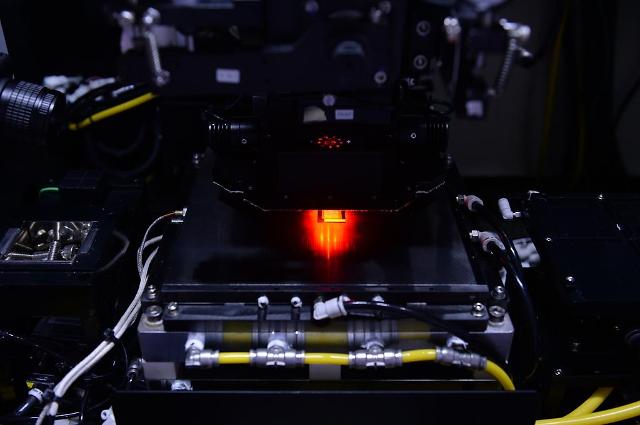 SEOUL -- Through a 16-year development project, South Korea's state research institute has discovered a way for the cheaper production of micro light-emitting diodes (microLEDs) by combining two separate manufacturing processes into a single one. The new technique using laser melding will save time and costs to eventually lower the price of microLED products.

A microLED is a microscopic LED that is ideal for the production of high-performance flat-panel displays. Compared to conventional liquid crystal display (LCD) and organic light-emitting diode (OLED) display technologies, the microLED technology offers better contrast, response times, and energy efficiency. As it has a higher density than normal LED TVs, microLED TVs are suitable for displaying ultra-high-resolution video contents.

Despite the superior characteristics of microLED, the complex manufacturing process makes it extremely expensive. Samsung's 110-inch microLED TV released in early 2021 came with a price tag of $156,000. Samsung's 85-inch LCD TV is priced at about $1,999.

The state-funded Electronics and Telecommunications Research Institute (ETRI) said in a statement on May 25 that its research team simplified the process of manufacturing microLEDs using a laser and a film-like novel material called SITRAB. Researchers were able to create a flat-panel display prototype with 1,225 microLEDs. The Institute aims to commercialize its technology in two years.

"In a sector where global display makers and related organizations are locked in a fierce competition, ETRI played a pioneering role by overcoming the limits of conventional display-making techniques," ETRI's microLED development division head Choi Gwang-seong was quoted as saying. When commercialized, ETRI said it can lower manufacturing costs and time down to 10 percent of the current method.

Conventional microLED manufacturing includes a transferring process in which microscopic LEDs are moved onto a chip, and a bonding process that fuses diodes and the chip together. ETRI's new method uses a laser to heat microLEDs adhered onto a SITRAB film to bond them onto a chip. ETRI said that its manufacturing technique can selectively meld LEDs without having to move diodes from a manufacturing palette to a preferred position before fusing. ETRI's laser-melding technique can also be used for other types of LEDs such as mini LEDs.