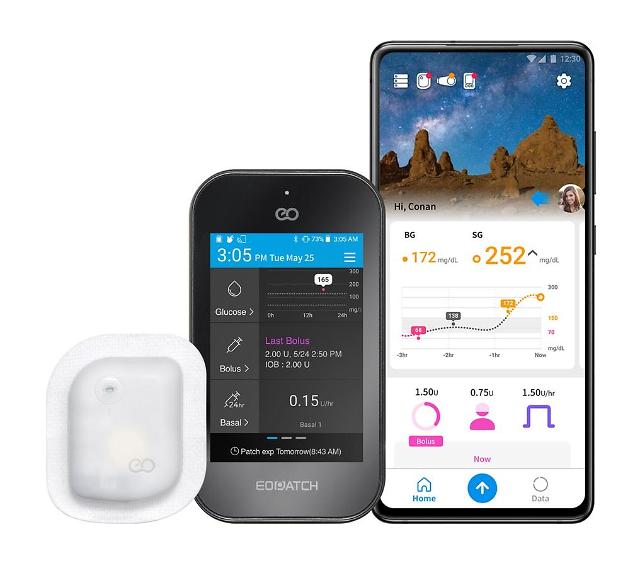 
SEOUL -- EOFlow, a provider of wearable drug delivery solutions in South Korea, will start selling an innovative wearable and disposable insulin pump in Europe in the second half of 2021 following its full launch in the domestic market in March. The pump called "EOPatch" will go with a controller and a smartphone app.

The insulin pump will be available in countries such as Canada and Australia that honor CE marking (CE Mark), an administrative marking with which the manufacturer or importer affirms its conformity with European health, safety, and environmental protection standards for products sold within the European Economic Area.

EOPatch's international debut comes after the pump secured CE Mark from the European Union. "EOPatch has successfully set its foothold in the domestic market and we are now looking forward to presenting our wearable insulin pump in the global market," EOFlow’s CEO Jesse Kim said in a statement.

"We are focusing all our capabilities on ensuring that the production and supply process goes smoothly with the goal of launching them in Europe in the second half of this year," Kim said. EOPatch is the world’s second wearable disposable insulin pump to be commercially available. EOFlow signed an exclusive five-year supply contract with Italian pharmaceutical company Menarini in 2019.

EOFlow said its product has secured competitiveness in many ways, including accuracy, the minimization of insertion error, and the lower risk of side effects as well as a small and light design, waterproof, the long-wear time to allow twice-a-week compliance and faster needle insertion for reduced pain.

EOFlow seeks to develop wearable drug delivery solutions in line with a trend of converting intravenous injection drugs to subcutaneous regimens that would empower users to administer drugs at home. EOFlow's product features a small and light design that drastically reduces size and weight, waterproof, a long-wear time to allow twice-a-week compliance, and faster needle insertion for reduced insertion pain.