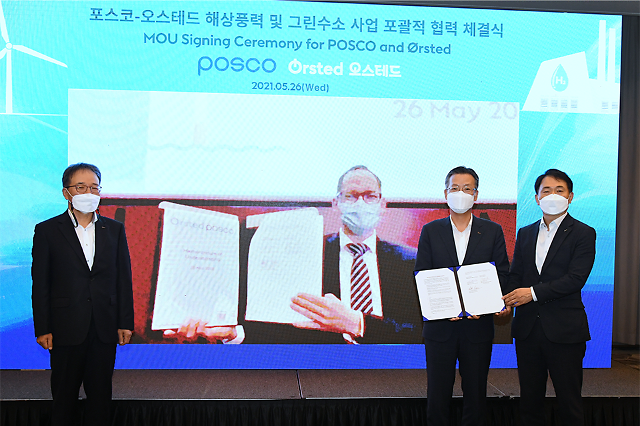 POSCO, a leading steel group in South Korea said that it signed a memorandum of understanding with Orsted for comprehensive cooperation. Orsted will develop offshore wind power projects and establish green hydrogen facilities in South Korea. POSCO will participate in the production of green hydrogen and supply steel materials. Green hydrogen is produced from water using renewable power.

POSCO said that its construction subsidiary, POSCO E&C, would build offshore wind power structures, while POSCO Energy will be in charge of green hydrogen storage and hydrogen generation. The steel group would conduct research and feasibility studies.

POSCO's strategic planning division head Chun Joong-sun said the partnership would create "win-win synergy" through the combination of POSCO's business capabilities and Orsted's operational know-how in the green hydrogen sector. "Our green hydrogen business will gain further momentum through this cooperation with Orsted," he said in a statement on May 27.

Orsted unveiled a green energy project in November 2020 to establish an offshore wind power complex with a potential capacity of up to 1.6GW near Kurop Island off the coast of Incheon, a port city west of Seoul. The site has relatively shallow water depths to allow for cost-effective development. The project requires about eight trillion won ($7.15 billion).