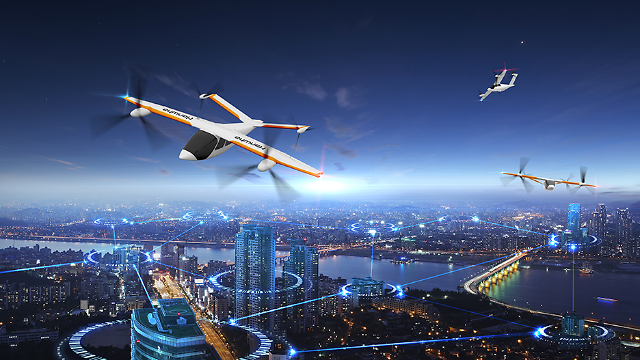 
SEOUL -- Skyports, a British company involved in the construction of infrastrucure for urban air mobility, tied up with Hanwha Systems to develop technologies for air taxi infrastructure. They would jointly research "seamless" technology for quick and convenient boarding and getting off at vertiports.

Under a memorandum of understanding with Skyports, Hanwha Systems said it would provide control technology necessary for the safe operation of vertiports, which are critical to the success of urban air mobility (UAM), an ecosystem covering personal air vehicles and infrastructure such as a new navigation system, take-off and landing fields and charging technologies.

A South Korean government road map unveiled in April suggested that more than 50 vertiports for electric and hybrid-electric vertical takeoff and landing aircraft, or eVTOLs, would be built nationwide by 2035. In 2020, Hanwha Systems partnered with Korea Airport Corporation (KAC), the operator of airports, for the development of integrated monitoring, control, navigation, take-off and landing facilities, and boarding services.

As a key member of UAM Team Korea, a public-private consultative body that would commercialize drone taxis in 2025, Hanwha Systems has proposed an air taxi capable of flying at a maxim speed of 320 kilometers (199 miles) per hour. Hanwha's air taxi called "Butterfly" will be applied with the tiltrotor design of low noise and high efficiency. Tiltrotor design combines the vertical lift capability of a helicopter with the speed and range of a conventional fixed-wing aircraft.