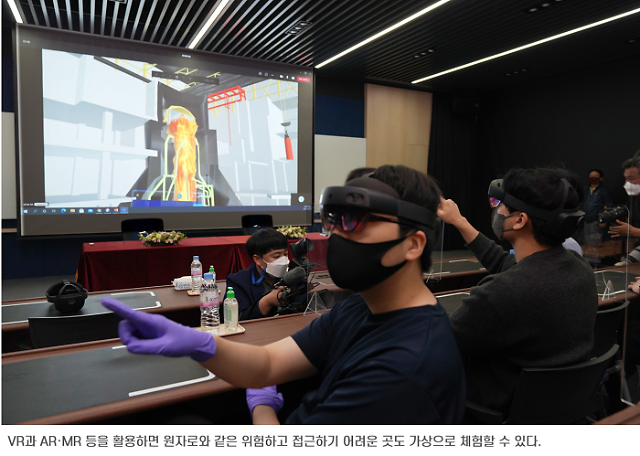 SEOUL --  A prominent engineering and science school in South Korea's southeastern port city of Pohang has opened an innovative lecture room that used advanced technologies such as virtual reality,  augmented reality and mixed reality to implement non-contact lectures and experiments without the actual presence of students.

Theoretically, there are no space restrictions, so lectures and classes can be held anytime, anywhere. Students who showed up in the classroom or have remote access can listen to lectures using virtual objects. Even without the presence of students, experimental assistants or professors, lectures can be conducted as if they are in one place. The lecture room can implement virtual reality (VR), augmented reality (AR) and mixed reality (MR).

MR is the emerging of real and virtual worlds to produce new environments and visualizations, where physical and digital objects co-exist and interact in real time. MR is a hybrid of reality and virtual reality. AR takes place in the physical world, with information or objects added virtually.

With all 320 freshmen provided with VR devices, Pohang University of Science and Technology (POSTECH) opened classes in April to induce self-directed and creative learning while maintaining the quality of education. The special 106-seat lecture room demonstrated a lecture hosted by Kim Wook-sung, a professor of electrical engineering, and a separate physics experiment on May 27.

When Kim turned on the computer and students put on VR devices, a large front screen showed the classroom with avatars appearing in empty seats. "You will be able to experience various content such as dangerous and inaccessible places you cannot go directly, as if you are looking at them in front of your eyes without time and space constraints," Kim said in a statement released by POSTECH. "We can create greater value through innovation not only in education but also in other areas."

Yoon Gun-su, a physical science professor, held the first VR-based simulation lecture that virtualized an actual experiment filmed with a 360-degree camera. Students can see the experimental instrument from various angles. The virtual microscope showed an enlarged picture of experiment materials. "If non-face-to-face classes are advanced, it could create a new educational paradigm in the post-COVID-19 era," he said.

"Through VR, AR, and MR-based classes, students can continue their studies anywhere in the world without being tied to college campuses in any situation," Yoon said. The school would distribute experimental kits to students so that they can experiment at home using VR devices. AR class will be introduced from the second semester.