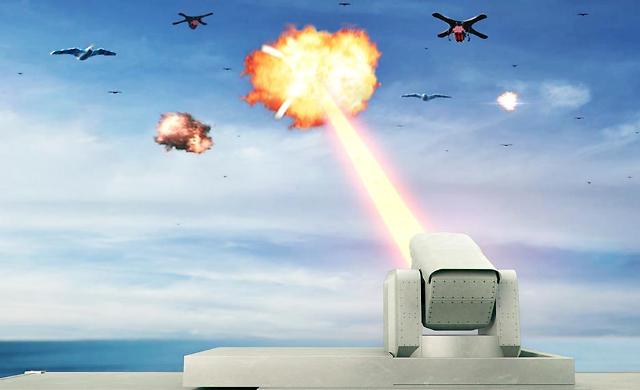 
SEOUL -- South Korea's Hanwha group has been selected for a military project to develop an oscillator for laser weapons that would be used for short-range air defense against small unmanned aircraft like drones. A laser emits light through a process of optical amplification based on the stimulated emission of electromagnetic radiation. An oscillator generates a coherent signal through resonant oscillation without an input signal.

Hanwha Corporation said it has received an order from the Agency for Defense Development (ADD), a national agency for research and development in defense technology, to develop a laser oscillator prototype project that would cost 24.3 billion won ($21.9 million) for four years. Laser oscillators are a key technology that determines the performance of laser weapons.

Hanwha said that advanced laser light source technology would be applied to the development of a laser oscillator. It brings together multiple laser beams to increase output. Hanwha has researched high-power laser light sources and laser-based sensor systems. Hanwha has already been involved in a military project to develop a laser weapon using light sources generated from optical fibers.

"We will contribute to the military deployment of future weapons through continuous research and development on high-power laser technology and prepare mid-to-long-term growth engines," an unnamed Hanwha official said in a statement on May 31.

ADD would improve laser weapon capabilities to intercept fighter jets and even satellites. South Korea's long-term goal is to develop technologies to track and identify space objects and satellites with lasers. Anti-satellite weapons are designed to incapacitate or destroy satellites. The role of anti-satellite weapons includes defensive measures against space-based, nuclear or intercontinental ballistic missiles and nuclear weapons.