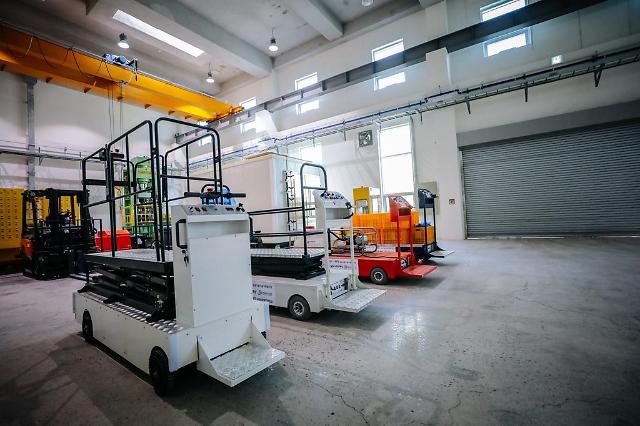 SEOUL -- A homemade smart farm robot capable of moving through a connected farm for pest control, carry crops and lift heavy objects made its commercial debut in South Korea. The autonomous robot can be guided by magnetic wires laid about 20 centimeters (7.8 inches) below the ground. It is more manageable than other robot guiding systems.

Developers say the price is about 30 percent of those produced by foreign companies. The new robot is useful for helping South Korea addressing its rapidly aging farming population. About 47 percent of farmers are aged over 65. A smart farm has been recommended for old farmers because it requires minimum physical labor using automated equipment hooked onto a wireless network.

A smart farm robot developed by the state-run Korea Evaluation Institute of Industrial Technology (KITECH) has been demonstrated at farms that grow citrus fruits, tomatoes and paprika. KITECH partnered with Fine Motors, a domestic special-purpose vehicle maker, to release a commercial version in May for a price of about 10 million won ($8,993)

The robot can carry up to 200 kilograms (440 pounds) and move uphill with a gradient of up to 36 degrees, KITECH said, adding it is operable in extreme conditions inside greenhouses where temperatures reach up to 50 degrees Celsius (122 Fahrenheit) and the humidity goes up to 80 percent. KITECH said that the robot has a work efficiency of about two workers. It can be used in outdoor environments such as unpaved roads.