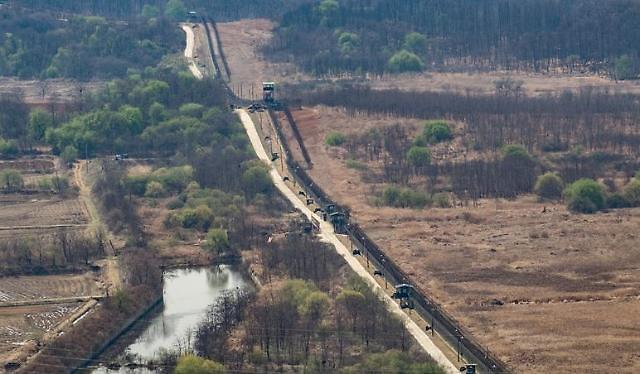 
SEOUL -- Two new surveillance devices using robots, high-resolution cameras or sound sensors will be tested in the second half of 2021 to lessen the heavy work of South Korean border guards and minimize blind spots through non-stop surveillance missions. One is a sentry robot that moves at least five meters per second along the rail.

The surveillance robot developed by KI is equipped with a high-resolution pan-tilt-zoom camera that can detect small objects at a distance of one kilometer in the daytime and more than 200 meters at night. Pan-tilt-zoom cameras capable of remote directional and zoom control are an essential part of modern surveillance systems as they can direct attention to suspicious events.

A surveillance system developed by IVS, a video and sound analysis solution provider, uses AI technology to recognize video and sound. An intelligent server learns through deep learning technology to identify whether an object in a closed-circuit TV video is an animal or a person, and alerts the control room when people approach the fence.

Even when a person approaches stealthily, the pattern of sound collected through a sound sensor will be analyzed to detect the direction for monitoring by an interlocked camera. The system has the advantage of continuously improving detection performance by applying algorithms that learn data collected in the field.

Scientific devices such as sensors, cameras and sensitive equipment have been installed for surveillance along South Korea's front-line iron fences that have played a key role in blocking surprise attacks and intrusion by North Korean soldiers across the world's last Cold War frontier established at the end of the 1950-53 Korean War. Sometimes, functional defects have been reported.

The demilitarized zone (DMZ) is a four-kilometer-wide strip of land that has divided the peninsula since an armistice accord ended the three-year conflict in 1953. Iron fences stretch about 250 km (160 miles) from the east to the west. Armed clashes and shooting have raised cross-border tensions sporadically between South and North Korean troops manning entrenched concrete guard posts inside the zone.