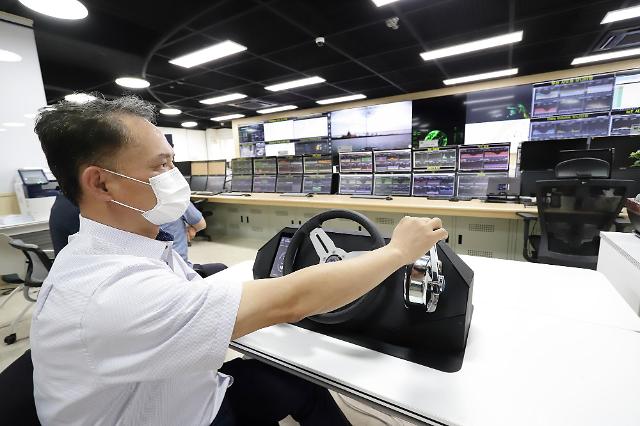 SEOUL -- A 12-seat cruise boat equipped with a self-sailing system made a successful test voyage without direct human intervention through a narrow canal in an event organized by the in-house venture of South Korea's Hyundai shipbuilding group. The demonstration was supervised from an inland control tower run by KT using a 5G network.

The demonstration was held on June 16 through a crowded canal which has an average width of 10 meters in the southeastern industry port of Pohang. The ship can cope with various unexpected situations using LiDAR and special cameras. LiDAR, which measures distance by illuminating the target with laser light, is a key component of autonomous driving.

HiNAS automatically recognizes surrounding vessels through camera analysis to determine and alert the risk of collision based on augmented reality. Even when visibility is not secured at night or by sea fog, infrared cameras comprehensively analyze and provide information such as the location and speed of obstacles.

Using HiNAS and HiBAS, the boat installed with a self-sailing system developed by Avikus, affiliated with the shipbuilding group, made a safe voyage for 10 kilometers (6.2 miles) without a skipper from a narrow inner port and an outer port with many environmental variables to the downstream of a river.

From a network control tower in Gwacheon, a southern satellite city of Seoul, KT received high-definition images and sensor information taken by cameras through a 5G network and supervised it remotely in real-time. KT used 360-degree surround images and a 5G Internet of things (IoT) router.

Probably in the second half of 2021, Avikus would work with a domestic shipping company to test the autonomous sailing of a large commercial vessel in the ocean. The goal is to upgrade technology and expand it to cargo and other ships.

"We will commercialize a self-driving leisure boat for the first time in the world next year based on our fully autonomous sailing technology that showed successful results in this demonstration. We will become the first mover in the self-sailing ship market," said Avikus CEO Lim Do-hyeong.