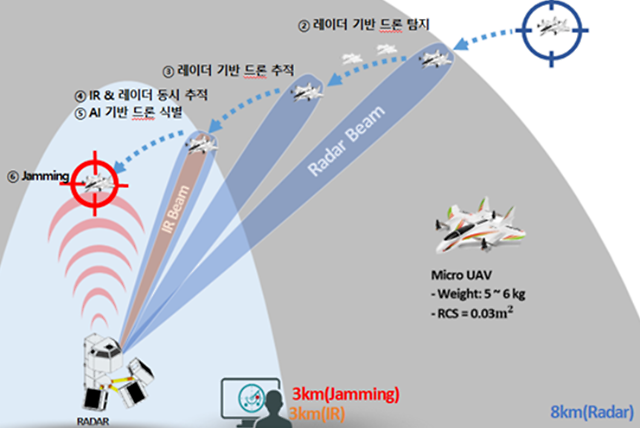 
SEOUL -- South Korea's military will test-run a radar-linked solution that can detect ultra-small drones and fire interference radio waves to neutralize them before they reach key military facilities. It is capable of detecting an ultra-small drone about eight kilometers away.

The anti-drone solution developed by K-NETZ, an IT company, will be piloted for six months from June 22, said the Defense Acquisition Program Administration (DAPA), a state arms procurement agency controlled by the Defense Ministry.

"South Korea is expected to lead the global market in the field of ultra-small drone detection radar as domestic researchers have developed a radar technology that can detect an ultra-small drone some eight kilometers away," DAPA said in a statement on June 22.

The anti-drone solution consists of an active electronically scanned array (AESA) radar, an infrared thermal imaging camera, a jammer system and a ground control tower. DAPA said the AESA radar used in the solution was developed by a startup created by Daegu Gyeongbuk Institute of Science and Technology (DGIST). AESA is a computer-controlled array antenna system that can electronically steer the beam of radio waves to point in different directions.

"We hope that our anti-aircraft capabilities to protect major military facilities will be strengthened further," Kim Il-dong, a senior DAPA official, was quoted as saying.

In April, a consortium led by the state-run Korea Atomic Energy Research Institute (KAERI) was selected for a government project to develop an intelligent drone cop system that could find and neutralize illegal drones threatening the safety of nuclear power plants, airports and other crucial facilities.