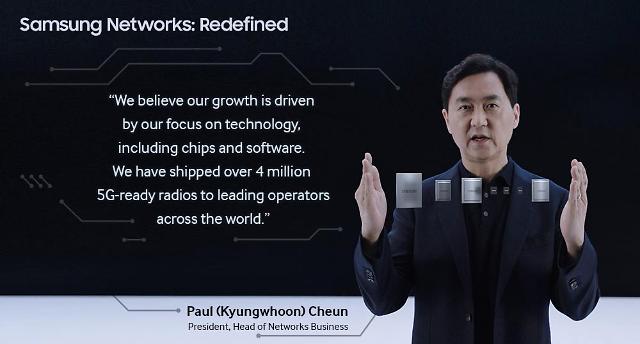 
SEOUL -- Samsung Electronics has unveiled new chipsets that can boost performance, increase power efficiency and reduce the size of 5G end-to-end solutions, along with a new all-in-one radio, as the company strives to expand its share in the global telecom equipment market and catch up with top players such as Huawei, Ericsson and Nokia.

For a true 5G ecosystem, technologies such as beamforming and massive multiple-input, multiple-output (Massive MIMO) are critical for increasing spectral efficiencies and providing cost-effective, reliable coverage. Beamforming focuses power to desired users to form beams, expand coverage and increase speed. Massive MIMO is a system with a high number of antennas that makes it far more resistant to interference and intentional jamming than standard MIMO networks which use two or four antennas.

Samsung said that its new chips would power next-generation products such as 5G Compact Macro, Massive MIMO radios and baseband units that will be commercially available in 2022. Compact Macro is a radio network configuration that integrates the baseband, radio and antenna in a small form factor.

Samsung's Compact Macro can support all frequencies within the Millimeter wave (mmWave) spectrum. mmWave is the band of spectrum between 30 gigahertz (GHz) and 300 GHz. 26 GHz and 28 GHz have emerged as two of the most important bands in the 5G offerings.

Samsung's new products included a third-generation mmWave radio frequency integrated circuit (RFIC) chip, a second-generation 5G modem system-on-chip (SoC) and a digital front end (DFE)-RFIC integrated chip. A system on a chip integrates all or most components of a computer or other electronic system.

The second-generation 5G modem SoC will enable Samsung’s forthcoming baseband unit to have twice the capacity while cutting power consumption in half per cell. It supports both below-6GHz and mmWave spectrums, offers beamforming and increases power efficiency for Samsung's new 5G Compact Macro and Massive MIMO radio while reducing the size for both solutions.

Samsung's new all-in-one radio features integrated antennas. It can simplify and speed up 5G installations by consolidating a 3.5GHz Massive MIMO radio with low-band and mid-band passive antennas into a single form factor. The radio will save space and reduce operating expenditure. The company said its new solution would become part of its radio access network (RAN) portfolio in early 2022.

The streamlined solution uses compact hardware and reduces cabling and hardware elements to minimize visual impact in dense urban areas, Samsung said, adding that deployment is simple by eliminating the need to install and connect radios and multiple antennas separately..

"Recognizing that mounting hardware, cabling, crew site time and space limitations are a challenge for most operators, we created a solution to help tackle this issue, and expand deployment boundaries," Samsung's product strategy head Roh Won-i was quoted as saying.