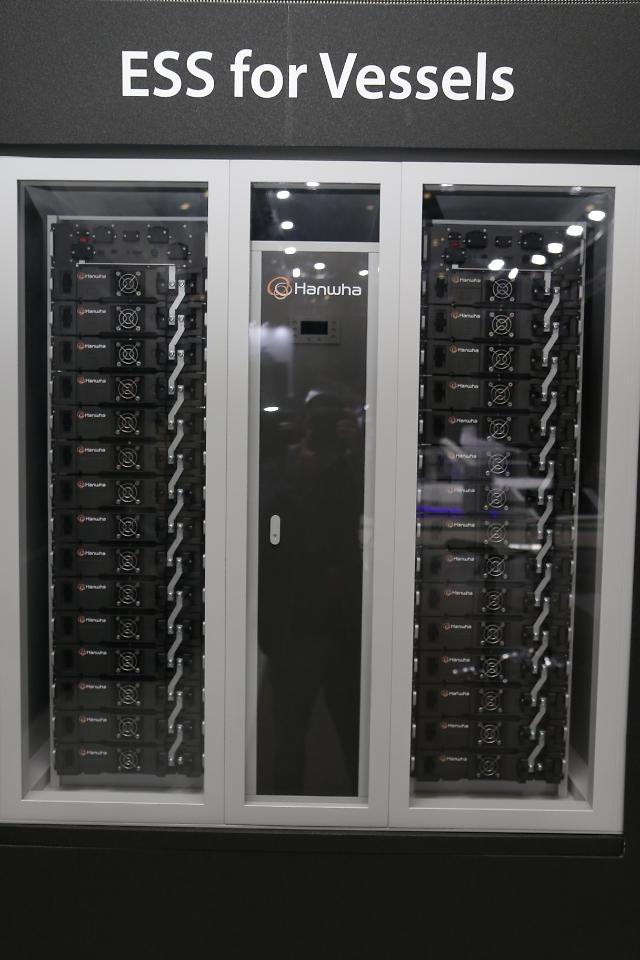 
SEOUL -- Hanwha Defense, a key defense contractor in South Korea, will utilize its know-how in a submarine lithium-ion battery pack to lead a three-year state project aimed at developing technology for a marine energy storage system with a high level of safety that would replace imports and target foreign clients.

Hanwha Defense has established a consortium with three research bodies, including the Korea Research Institute of Ships and Ocean Engineering (KRISO), and companies such as Daewoo Shipbuilding & Marine Engineering (DSME). In February 2020, the shipbuilder partnered with Hanwha Defense for the development of a lithium-ion battery-based energy storage system that can reduce fuel use and emissions of pollutants generated by ships.

lithium battery-based energy storage devices are seen as a next-generation ship energy source. Through a technology development deal with KETEP, Hanwha Defense hopes to set up an important bridgehead for entering the market for civilian eco-friendly ships. The company has developed its own energy storage system for state-run ships.

Hanwha Defense CEO Sohn Jae-il said his company would cooperate with partners to focus on standardizing "the world's safest and most competitive ESS product" for ships. "We hope that this will contribute to enhancing the competitiveness of our nation by activating the development and dissemination of eco-friendly ship technologies in South Korea," Sohn said in a statement on June 24.

Hanwha Defense and its partners would focus on energy storage systems for 1MWh-class and 200kWh-class ships and carry out evaluation, certification and safety verification tests. They would develop technologies such as preventing heat transfer, firefighting in module units, optimal design for marine environments, lightweight and miniaturization and safety control.

Hanwha Defense said it has accumulated technology and know-how related to large-capacity marine energy storage devices through the development of a submarine battery pack that demonstrated world-class safety and reliability through a performance verification test in a harsh test environment.

South Korea has carried out the preliminary design of a diesel-electric submarine carrying lithium-ion batteries that are more power-efficient, take up less space and improve underwater navigation capability and high-speed maneuvering compared to conventional lead-acid batteries. Safety and reliability were prioritized for the development of lithium-ion batteries for submarines.