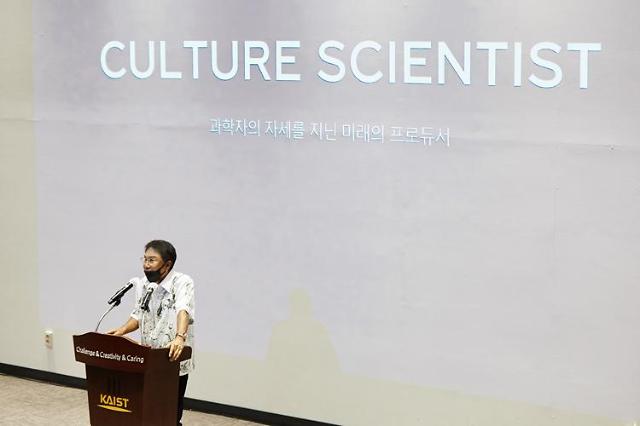 SEOUL -- SM Entertainment founder Lee Soo-man disclosed his strong desire to expand platforms to the metaverse, which is a collective virtual shared space, created by the convergence of virtually enhanced physical reality and physically persistent virtual space, saying culture would be combined with technology to present new content experiences.

"Future producers need to be culture scientists, and we need a lot of culture scientists to produce the future entertainment world we want to live in," Lee said in a lecture at the campus of the Korea Advanced Institute of Science & Technology (KAIST) after SM and the state-run institute signed a cooperation agreement on June 23 for research on content, artificial intelligence, robots, and culture technology.

SM and KAIST agreed to conduct joint projects related to the production of digital avatars. "The future entertainment will be a world of celebrities and robots. The beginning of robots is avatars," said the 69-year-old producer who was credited with venturing into the global entertainment market to promote K-pop.

Culture technology (CT) is the core competence that made K-pop a global culture, Lee said, adding culture technology should not end up in one generation and pass on to future generations. "CT continues to evolve with advances in technology. It is important to constantly try to integrate culture and technology to present new content experiences."

"The future world of celebrities and avatars has already begun," Lee said, referring to Aespa, a new SM girl band. Aespa's real-life members and avatars communicate through a connection signal called "Sync" with the help of an AI system. Avatar characters are involved in independent activities, such as producing their own online content, allowing real-world members to meet fans in more diverse ways.

The combination of culture, AI and other technologies can advance the future entertainment world beyond mankind's imagination, Lee said. "Culture Technology will evolve into a convergence of culture and technology."

South Korea has seen the quick adoption of metaverse technologies in entertainment, banking and other communities. In May, STAYC, a six-member K-pop girl group, was selected for SK Telecom's project to incorporate metaverse technology into K-pop content. SK Telecom (SKT) released STAYC's digital human content through SKT's augmented reality (AR) app and a music video filmed against the backdrop of metaverse space through a YouTube channel.

SKT is a key member of South Korea's metaverse alliance launched in May to establish an open platform that would allow companies to utilize data and develop new services. The alliance involving private companies, research organizations and state bodies cultivates a metaverse ecosystem based on extended reality (XR) and media. XR encompasses a wide spectrum of hardware and software that enable content creation for virtual reality, mixed reality and cinematic reality.