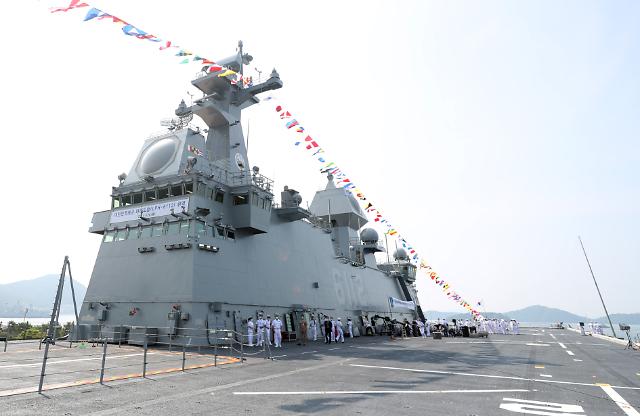 
SEOUL -- South Korea commissioned a second amphibious warfare ship that can accommodate amphibious assault vehicles for landing by marine troops. The new ship's combat capabilities have been strengthened by installing new equipment that will contribute to acquiring know-how for the construction and operation of a light aircraft carrier.

The 14,500-ton amphibious assault ship named "Marado" designed by Hanjin Heavy Industries is 199 meters and can sail at a maximum speed of 42 kilometers (26 miles) per hour. It is capable of carrying some 700 marines along with tanks, armored personnel carriers and hovercrafts in the lower deck and helicopters on the top deck. The first shipi, Dokdo, was commissioned in 2007.

"As a multipurpose joint operation platform, the Marado ship will carry out a variety of duties and serve as a guide for the construction of a South Korean light aircraft carrier," Navy chief Boo Suk-jong said in a ceremony at the southern naval port of Jinhae. The Defense Ministry has formalized a project to develop a 30,000-ton light aircraft carrier.

Along with a landing mission, South Korean amphibious warfare ships are designed to carry out multi-purpose missions such as operational command in the event of a disaster, the withdrawal of overseas citizens in case of an emergency, and a command and control center in naval operations.

The Marado has better operational capabilities than its previous version and can load Osprey, an American multi-mission, tiltrotor military aircraft with both vertical takeoff and landing and short takeoff and landing capabilities. The new vessel is installed with Haegung (sea bow), a guided missile designed to intercept missiles and aircraft, and a homemade combat system that has improved data processing speed, target response and weapon control capabilities.

The Marado has a new type of radars with enhanced target identification, a wider ramp and reinforced decks for enhanced takeoff and landing capabilities.