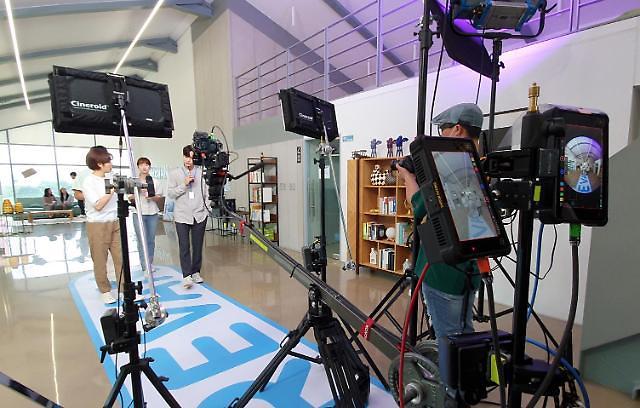 
SEOUL -- "Re-Feel: If Only," a digital drama produced with three-dimensional effects, 8K resolution and virtual reality for the first time in South Korea, is ready to memorize viewers. The experimental six-episode drama is the result of cooperation between LG Uplus, a mobile carrier, and Playlist, a domestic web drama maker.

"Re-Feel: If Only" is a fantasy romantic comedy-drama in which the protagonist, who drinks a special coffee that allows them to go back to the past, struggles to capture the hearts of lovers with the power of coffee. First and second episodes will be rolled out at once on July 14 through the virtual reality service platform of LG Uplus (LGU+). Follow-up episodes are to be released every other Wednesday until September.

The spin-off work of its previous digital drama "Re-Feel" can be viewed in 3D VR mode and 2D normal mode. "It is meaningful to introduce South Korea's first 5G-based 8K VR drama as the work of Playlist which leads the drama content market targeting Millennial and Z generations," Playlist CEO Park Tae-won said in a statement, vowing to provide various content and services such as AR music videos and multi-view images to attract MZers.

Although 8K VR content was rarely made into a drama due to high production costs. LGU+ has reduced the time and cost of filming by creating a camera layout in advance to meticulously organize camera location and the movement of actors. The whole body was shot in one take. "As we have increased the vitality of images with 8K 3D, we expect customers to watch our content more realistically," LGU+'s XR service head Choi Yoon-ho said in a statement.

3D VR is a method that prepares images of left and right eyes separately to maximize a three-dimensional effect that makes viewers feel more realistic in scenes. When a person appears outside the camera's gaze or a sound is heard, the viewer can turn his head and respond to the scene.