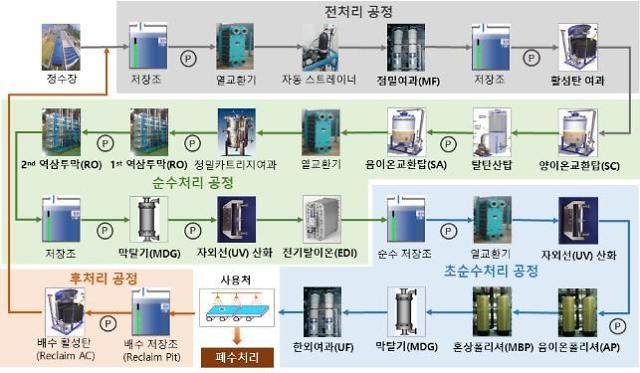 [Courtesy of the Ministry of Environment]

SEOUL -- In an effort to reduce its dependence on foreign products especially from Japan, South Korea will push for the localization of technology on the production of ultrapure water, which is commonly used in the semiconductor industry.

The Ministry of Environment tied up with K-Water, a state water resource development and management agency, and the state-funded Korea Environmental Industry & Technology Institute (KEITI) to develop technologies for the localization of ultrapure water, or highly purified water, which is purified to uncommonly stringent specifications. With organic particles and dissolved gases removed, water is treated to the highest levels of purity for all contaminant types.

South Korea has relied on Japanese and other foreign companies to produce and supply ultrapure industrial water. Since Japan imposed trade restrictions in July 2019, South Korean firms have tried hard to localize key industrial materials used for the production of semiconductors and displays.

The Ministry of Environment has earmarked some 48 billion won ($41.7 million) for the development of key ultrapure water technologies such as ultraviolet oxidation devices and gas removal membranes. The ministry's goal is to achieve a 60 percent localization rate by 2025. K-Water would install and operate a demonstration plant that produces 2,400 tons of ultrapure water a day.

"The demand for high-purity industrial water is gradually expanding in high value-added industries such as semiconductors, pharmaceuticals, bio and precision chemistry," said Kim Dong-jin, an environment ministry responsible for water resource policy. "If the technology development project is implemented without a hitch, it will serve as a stepping stone for the domestic water treatment industry to enter overseas markets and end its dependence on overseas technology."