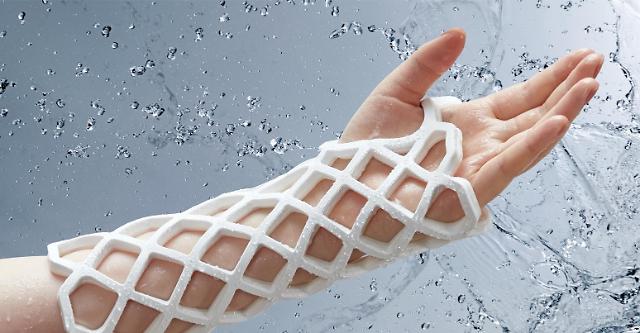 SEOUL -- Patients wearing a new type of cast that is shaped like a fishnet have higher satisfaction than wearing an old-fashioned cast made of plaster or other composite materials including carbon fiber or metal, a survey showed. The new cast is light and waterproof.

Casts are used to firmly hold the limbs or other body parts to minimize movements. Traditional casts use plaster or other hard materials to wrap body parts like a bandage. While wounds heal, the skin under the cast gets very itch and smelly. Because it is hard to dry skin underneath layers of plaster, it is not easy for a patient to take a shower.

Seoul National University Bundang Hospital conducted a survey of 22 patients in 2021 to check the satisfaction level of patients who used both the traditional-type cast and the new mesh-type open cast. Participants who wore both types of casts for two weeks each felt that their quality of life was superior when wearing an open cast.

Some patients were scared when doctors removed plaster casts with electric cutting tools but the mesh-type cast created by OpenM, a domestic cast maker, caused no panic as it was easily removed. OpenM's cast made of plastic is used at selected hospitals.

"Normally, patients with casts feel very uncomfortable because they cannot have a shower. However, patients can freely have a shower while wearing an open cast," an OpenM official told Aju Business Daily. "We also have customers in the Southeast Asian region and Europe. Our product is receiving positive feedback."