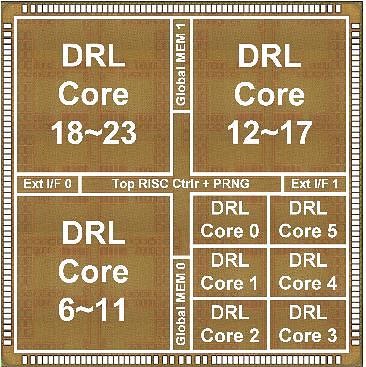 
SEOUL -- A South Korean research team has developed a semiconductor chip that allows deep reinforcement learning, which is an artificial intelligence learning method, to be processed in mobile devices. It can be used for autonomous robots and floating-point operations are possible with reduced power consumption.

The Ministry of Science and ICT said that a research team led by Yoo Hoi-jun, a professor of electrical engineering at the state-run Korea Advanced Institute of Science & Technology (KAIST), has developed an AI semiconductor technology called "omniDRL."

"This study is meaningful in that we have developed AI semiconductor technology that enables deep neural networks to be inferred and learned with high compression in one semiconductor and floating-point operations, in particular, that were considered impossible," Yoo was quoted as saying. "We hope this can be applied in various fields such as intelligent robot control, autonomous drones and games."

DRL could only be implemented by using multiple high-performance computers with high-capacity memory in parallel to process large-scale data. It was difficult to implement DRL in mobile devices. Yoo's team has adopted processing-in-memory (PIM) technology to develop a DRL chip that can be used in mobile devices. PIM combines logic-based complex processing units within a computer memory.

Unlike conventional semiconductors that could only be operated by releasing compressed data, the new chip can calculate compressed data by increasing the speed of computation. It enables high-performance DRL with less power consumption. The new chip has 2.4 times more energy-efficient than the world's best DRL chips, the ministry said, adding that it can be used for customized AI services on mobile devices and realize more human-friendly AI technology.