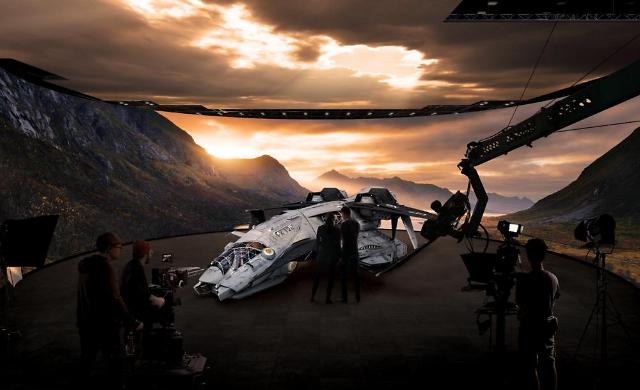 
SEOUL -- A virtual production studio to be built by CJ ENM, the South Korean entertainment group that produced the Oscar-winning 2020 film "Parasite," will feature a massive micro light-emitting diodes screen measuring over 1,000 inches that can produce vibrant colors and details supporting up to 16K high-resolution content.

The studio that will open in Paju north of Seoul by the end of 2021 leverages Samsung Electronics' microLED technology called "The Wall." Samsung said the main display will be installed in an oval shape with a diameter of 20 meters and a height of seven meters or more, creating a seemingly endless backdrop to capture content.

The studio will use LED displays and connected cameras to create virtual settings in real-time, Samsung said, adding the solution will save time and reduce image compositing and on-location production costs while helping filmmakers to see the camera on the live-action set in any direction. Creators can design environments to specific requirements, along with a variety of installation options such as ceiling installation and convex or concave design, depending on the internal studio design.

"The strategic partnership with Samsung will allow CJ ENM to push forward the creation of a new powerhouse of the next-generation content," CJ ENM CEO Kang Ho-sung said in a statement released on July 26. "While CJ ENM is investing $4.4 billion over the next five years in entertainment content, we are taking the lead in building a global No. 1 production studio to become a world-leading entertainment company."

CJ ENM's studio will use the visual content creation technology of Epic Games, an American 3D game engine company. Epic's "Unreal Engine" was used in the production of many Hollywood content and video games such as "The Mandalorian," a popular Star Wars franchise drama series created by Disney. The studio will create computer-generated scenes including actors and environments in real-time.

Samsung said its technology enhances visual expression with ultra-deep blacks and wide viewing angles, giving filmmakers and content creators the ultimate canvas to fulfill their visions. The modular screens are ideal for studios thanks to their precise color expression, and cinema LED picture quality technology and optimized frame rates for production houses.