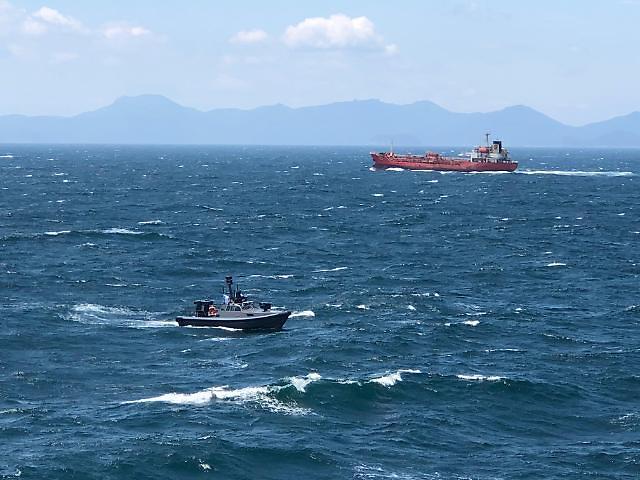 SEOUL -- LIG Nex1, a defense contractor involved in the development of radar and missile guidance systems, has completed the development and demonstration of a new unmanned coastguard patrol boat equipped with state-of-the-art surveillance equipment, a remote shooting control system, and a guided rocket launcher.

LIG Nex1 said it would tap overseas markets through cooperation with foreign companies by upgrading technologies that can be used for coastal surveillance and patrol operations. "We are focusing on developing an unmanned platform that can meet the government's smart defense," LIG Nex1 CEO Kim Ji-chan said in a statement on July 28.

In 2020, LIG Nex 1 showcased a prototype of its unmanned surface vehicle (USV) Haegum (Sea Sword), an eight-meter-long monohull autonomous boat equipped with radar, special cameras, communication equipment and a cargo module. It also has a machinegun and AT-1K Raybolt anti-tank missiles mounted on a weapon station that can be remotely controlled. The USV was designed to carry out surveillance and reconnaissance operations to monitor other ships that are engaged in illegal activities such as unregulated fishing, smuggling and human trafficking.

LIG Nex1 produces a wide range of advanced precision electronic systems such as missiles, torpedoes, radars, tactical communication systems and naval combat systems. The company has been involved in a state-funded project to develop, demonstrate and commercialize an artificial intelligence-based smart ship platform and an autonomous coastguard patrol boat.