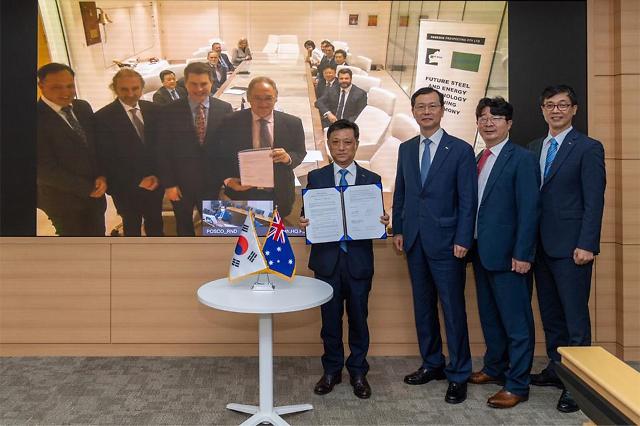 
SEOUL -- South Korea's steel group POSCO has tied up with its Australian raw material supplier, Roy Hill Holdings, to establish a cooperative system for the reduction of carbon emissions, ranging from the production of hydrogen and joint research into hot briquetted iron, which is a briquetted form of direct reduced iron with high iron content.

POSCO holds 12.5 percent of Roy Hill Holdings, which is involved in an iron ore mining project in the Pilbara region of Western Australia, and imports 16 million tons of iron ore annually. The Roy Hill mine is Australia's largest single mine, with an iron ore reserve of 2.3 billion tons.

"We hope that the commercialization of hydrogen-reducing steel by utilizing POSCO's world-class steel technology and Roy Hill's mining expertise will provide an important turning point in achieving carbon neutrality," POSCO's steel sector head Kim Hak-dong said in a statement on August 2 after the two companies held an online ceremony to sign a memorandum of understanding.

POSCO has stepped up efforts to decarbonize and reach net-zero carbon emissions by 2050. In July, the steel group joined hands with Rio Tinto, the world's second-largest metals and mining corporation, to develop and demonstrate technologies for their transition to a low-carbon emission steel value chain.