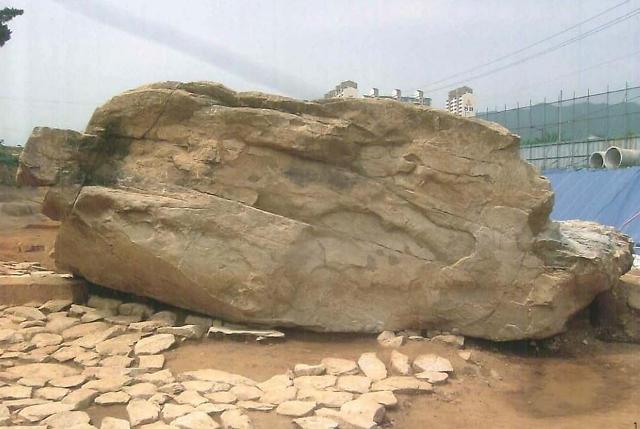 SEOUL -- South Korea's largest Bronze Age dolmen discovered in 2007 during the construction of a residential development zone has been officially recognized as a graveyard, not an altar, ending years of debate in the academic community over its purpose.

The dolmen in Gimhae is 7.3 meters long, 5.0 meters wide, and 4.0 meters thick, and weighs 350 tons. Gimhae City said on July 30 that the dolmen in Gusan-dong turned out to be a graveyard built around the 1st century BC. Through an excavation that began in December 2020, the city characterized dolmen as the largest in the world.

“The discovery is a big archaeological achievement linked with the beginning of the Gaya confederacy 2,000 years ago," Gimhae Mayor Huh Sung-gon was quoted as saying. The mayor will actively take experts’ advice to restore the dolmen, so it can be later designated as a national historical site. Under the dolmen, the city said archaeologists have discovered a wooden coffin and related relics including two pottery pieces in the shape of a mounted bowl and jar. A six-member academic advisory group concluded it was a graveyard.

A dolmen is a type of single-chamber megalithic tomb, usually consisting of two or more vertical megaliths supporting a large flat horizontal capstone or table. The dolmen culture is linked with the Neolithic and bronze cultures.

The Korean Peninsula is home to the world's highest concentration of about 35,000 dolmens, accounting for 40 percent of the world's total. Archaeologists still do not know who erected these dolmens. They are generally regarded as tombs or burial chambers. Human remains, sometimes accompanied by artifacts, have been found in or close to the dolmens.